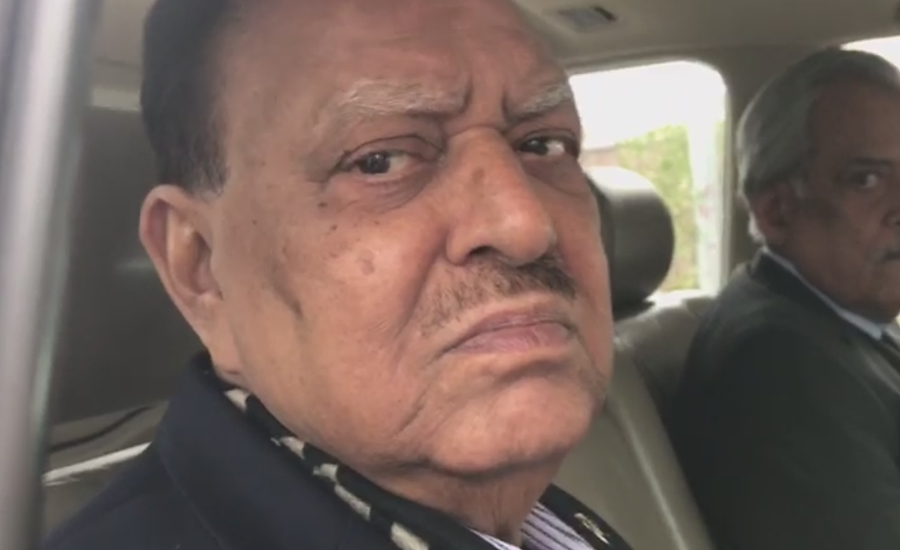 LAHORE (92 News) – The family members and PML-N leaders, including former president Mamnoon Hussain, on Thursday met former prime minister Nawaz Sharif convicted in the Al-Azizia reference. Marriyum Aurangzeb reached the jail by rickshaw, while Javed Hashmi came to jail by a bike. During the meeting, Nawaz Sharif expressed his concern over the economic policies introduced by the government. He got information about the NA meetings and CPEC projects. “The country was on way to progress during our period,” he said. He also listened to the ‘kalam’ of Punjabi sufi saint Mian Muhammad Bakhsh. A heavy contingent of police was deployed outside jail. According to the details, the Pakistan Muslim League-N (PMLN) leaders including former National Assembly speaker Ayaz Sadiq, former prime minister Shahid Khaqan Abbasi, Asif Karmani and other leaders had reached in Kotlakhpat jail to meet their party supreme leader. On the occasion, while speaking to the journalists, the former president said that he came to meet with Sharif for expressing solidarity with him. “I am here to do my obligation of relation with him,” he said. To a question regarding health of former premier, he said that Nawaz Sharif is not well and the board of doctors has been constituted. “I was very active president and have done a lot of work during my tenure. But I never advertise my works,” he replies to the question of journalist about his performance. To another question about inflation, Mamnoon Hussain said that the country is facing economic crisis. “The country has never faced such an inflation in past. Imran Khan is not ruling the country in right direction,” he said. The former president advised the government to rectify the problem of economy; however the survival of the poor has become difficult in the difficult situation. He further said that millions of people have become unemployed. Mamnoon Hussain prayed from Almighty Allah for resolving the problem of country. He hoped the justice for Nawaz Sharif from God. Meanwhile, the PML-N supreme leader is serving a seven-year jail term after being convicted in a corruption case known as Al-Azizia reference. On Jan 28, the Islamabad High Court (IHC) has postponed former prime minister Nawaz Sharif’s plea for bail on medical grounds in the Al-Azizia reference till February 6.  The court issued notices to respondents and sought the reply by next week. It also ordered Nawaz Sharif to present the original medical reports.

On Dec 24 2018, Accountability Court Judge Arshad Malik sentenced former premier Nawaz Sharif in the Al-Azizia while acquitted in Flagship Investment references. The court also fined him US$25 million. After the verdict, Nawaz Sharif was arrested. Announcing the verdict, the judge remarked that the former premier had failed in giving the money trail in the Al-Azizia reference. “However, the prosecution failed to prove the allegation in the Flagship reference,” he announced.