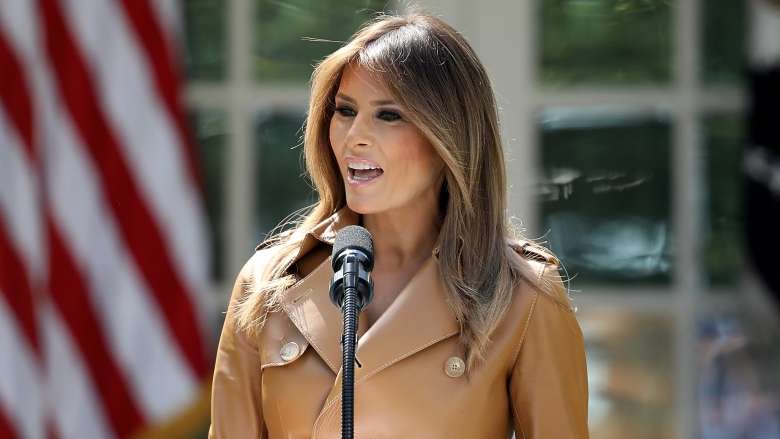 CHICAGO (Reuters) - President Donald Trump’s wife, Melania Trump, underwent a surgical procedure to treat a benign kidney condition and will remain at Walter Reed medical centre for the rest of the week, the first lady’s office said. Spokeswoman Stephanie Grisham said in a statement that Mrs. Trump, 48, underwent an embolization procedure to treat the kidney condition.”The procedure was successful and there were no complications,” Grisham said. “The first lady looks forward to a full recovery so she can continue her work on behalf of children everywhere.” President Trump spoke with his wife of 13 years before the procedure and talked to the doctor after it was completed, a White House official said. Trump later travelled by his Marine One helicopter to Walter Reed to visit his wife. “Heading over to Walter Reed Medical Center to see our great First Lady, Melania. Successful procedure, she is in good spirits. Thank you to all of the well-wishers!” he tweeted. An embolization is a minimally invasive procedure often used to block the flow of blood to a tumour or an abnormal area of tissue. Dr. Keith Kowalczyk, a urologist at MedStar Georgetown University Hospital, said that based on available information it appeared that Melania Trump was treated for a benign tumour known as an angiomyolipoma. “It’s the most common benign tumour that’s out there. It is a tumour, which means it’s a growth. There’s no worry for it to spread or metastasize. Once it’s treated, it’s treated,” he said. Kowalczyk said women in their mid to late 40s make up 80 to 90 percent of the cases of angiomyolipomas. “It kind of all fits. But I don’t know. Any time you are doing an embolization, it’s because something might bleed. She’s young and healthy and I can’t really think of any other reason you would embolize someone like that.” Kowalczyk said angiomyolipomas are most commonly found by chance. “Usually, with embolization there is over a 90 percent success rate,” he said. The Slovenian-born first lady last week rolled out an agenda for her White House work focussed on helping children. A CNN/SSRS poll found last week that Melania was viewed favourably by 57 percent of Americans, up from 47 percent in January. Her husband’s job approval rating lags behind hers at 50 percent or less.