Mercedes back on top in Japanese GP practice 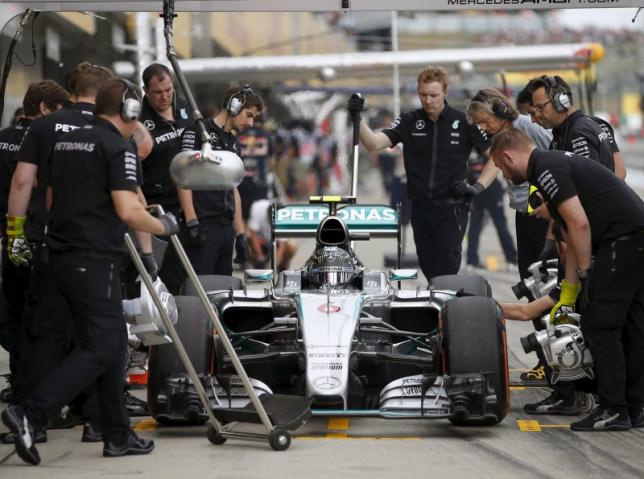 Mercedes back on top in Japanese GP practice

SUZUKA, Japan – Nico Rosberg and world champion Lewis Hamilton filled the top two slots on the timesheets in final Japanese Grand Prix practice on Saturday as Mercedes bounced back from last weekend's Singapore flop. Germany's Rosberg, 41 points behind his British team mate and rival with six races remaining, lapped the fast Suzuka circuit with a best time of one minute 33.995 seconds on a sunny morning. Hamilton, chasing his eighth victory of the season and 12th pole in 14 races, was 0.297 slower with Australian Daniel Ricciardo third quickest for Renault-engined Red Bull but more than half a second off the pace. The Williams pair of Valtteri Bottas and Felipe Massa were fourth and fifth as Mercedes-powered cars filled four of the top five places. Mercedes had arrived in Japan looking for answers after their dominance disappeared in Singapore, with Ferrari's Sebastian Vettel winning from pole position. With Friday's two sessions largely washed out by rain, Saturday was the first chance to assess the teams' relative performance. Vettel was only eighth fastest, with team mate Kimi Raikkonen sixth and just quicker than Toro Rosso's Max Verstappen. Verstappen is competing in his last race as a 17-year-old, with the Dutch teenager turning 18 next week. Britain's Jenson Button was 12th fastest for McLaren in engine partner Honda's home race. –Reuters