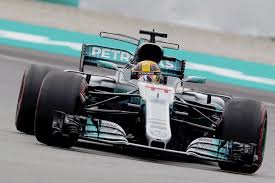 LONDON (Reuters) - Formula One champions Mercedes made mistakes in the last three back-to-back races but they still have the fastest car, according to team boss Toto Wolff.
World champion Lewis Hamilton won in France last month but suffered his first retirement in two years at the following race in Austria and was second in his home British Grand Prix after going from pole position to last. The Briton heads to Hockenheim for this weekend’s German Grand Prix with an eight-point gap to make up on Ferrari’s four- times champion Sebastian Vettel, who will be racing in front of his home crowd. “We didn’t score as many points in the triple-header as we had hoped for. A lot of that was down to our own mistakes,” Wolff said in a team preview of Sunday’s race. “However, there is a silver lining to this — while we didn’t maximise on points, we did bring the quickest car to all three races.” Vettel won in Silverstone while Red Bull’s 20-year-old Dutchman Max Verstappen took his first win of the season at his team’s home race in Austria. The triple header was a first for Formula One, the scheduling aimed at avoiding a clash with the World Cup final in Russia. Mercedes started all three races from pole position but Hamilton and team mate Valtteri Bottas scored only 61 points between them, compared to 98 for championship leaders Ferrari and 65 for Red Bull. Hockenheim is the 11th race of the 21-round season and Mercedes have won just three times, compared to six by the same stage last year. “We’ve had a decent first half,” Wolff said. “On the one hand, we’ve left points on the table and had to do damage limitation more often than we would have wanted. “On the other hand, we still scored a good amount of points, both drivers have shown strong performances and we have a fast car. So there are many reasons why we’re looking forward to the second half of the 2018 season.” Hockenheim did not host a race last year but Hamilton won there in 2016.