KARACHI (92 News) – The current hot spell in Karachi is likely to persist till Friday, with maximum temperature expected to reach 42 degrees centigrade on Wednesday (today). The Met Office says ongoing uptick in the temperature will die down on Friday when mercury on the scale is expected to remain between 40 and 42 degree centigrade. Mainly hot and dry weather is expected in most parts of the country in next 24 hours. The heat wave has gripped the metropolis and the citizens disrupted due to the high temperature while emergency has been imposed in government hospitals.

Sindh Government has established one hundred fifteen heatstroke centers in all parts of Karachi to facilitate the people. 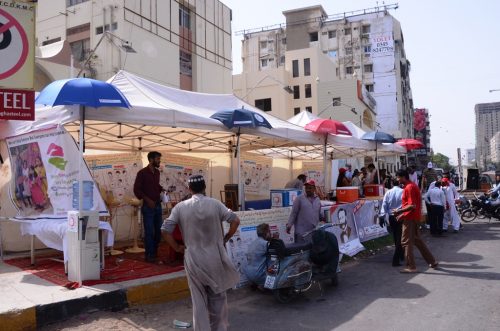 Heat emergency have been declared in all thirteen hospitals of Karachi Metropolitan Corporation while staff of these hospitals have been put on alert to cope with situation. The Pakistan Meteorological Department (PMD) has forecast heatwave in the city from tomorrow because of sea breeze. The PMD had issued an alert for Karachi, stating that during the first three days of May, maximum temperatures during the day will range from 40 to 42 degrees Celsius as the sea breeze halts. “Winds flow will be from North/Northwest during daytime. Authorities and all stakeholders are requested to take precautionary measures and keep themselves abreast for update from Met Office,” it said in a statement. The low pressure in the Arabian Sea hampers routine sea breeze to the city during the heat wave and hot and dry winds could blow from north and northwest, the heat wave warning centre said.

Earlier, the Pakistan Meteorological Department (PMD) has issued a heat wave alert for Karachi. As per details, the extremely hot weather conditions are likely to occur from May 1 to May 3, said Pakistan Meteorological Department. Maximum temperature, during the heat wave period, will remain 42 °C. Weather conditions are due to the change in the wind direction as well as the sea breeze coming to a standstill. The worst heat wave to hit Karachi for killed many last year. The problem was compounded by power cuts which left people unable to cool themselves with fans and air conditioners, particularly affecting those unable to afford generators.