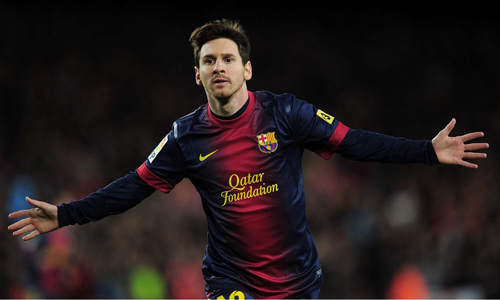 BARCELONA - Lionel Messi-inspired Barcelona overwhelmed Manchester City as Ivan Rakitic's strike secured a 1-0 win on Wednesday that sent the Spanish giants into the Champions League quarter-finals 3-1 on aggregate. Only a magnificent performance by goalkeeper Joe Hart saved City from a heavy defeat and Sergio Aguero's feeble late penalty miss proved insignificant for the outclassed English champions. "I expected City as they played. It was a game with a lot of chances where we could have finished it off a lot earlier," Barca coach Luis Enrique told reporters. "We got what we wanted which was to go through to the next round and I am happy with the display. We played well and this is a big boost for us at this stage of the season." Messi has been in blistering form and he delighted the home fans in a packed Nou Camp by relentlessly teasing the City players with his party tricks. Holding the advantage from the first leg, Barca could afford to sit back and hit the Premier League side on the break. COOL LOB City struggled badly in defence against Barca's pace and movement and the breakthrough came after 31 minutes when Messi found Rakitic who coolly lobbed the ball over Hart. Barca hit the woodwork through Neymar and Luis Suarez, and keeper Marc-Andre ter Stegen saved Sergio Aguero's weak penalty in a victory that enabled the Spanish side to reach the quarter-finals for a record eighth successive year. It was the second straight season that City have been knocked out by Barcelona at this stage and meant there will be no English representative in the quarter-finals of Europe’s elite competition. City’s hopes depended on having a tight defence, but under-fire centre back Vincent Kompany gifted the hosts a golden chance after five minutes, when Dani Alves stole the ball and set up Neymar whose shot came back off the post. Messi had a shot from a tight angle saved by Hart and the Barcelona forward line were on the receiving end of some wild challenges as City tried to keep them at bay. Barca increased their stranglehold on the tie when Messi found Rakitic in space to score and Suarez ran through on goal but was denied by a post. The hosts continued to create clearcut chances in the second half with Neymar missing an excellent opportunity with just the keeper to beat after 75 minutes. Barca were guilty of sitting on their lead and could have been punished had City been more clinical. Gerard Pique was adjudged to have fouled Aguero with 12 minutes to play but Ter Stegen saved the Argentine's tame spot-kick and snuffed out City's last hope of launching a comeback.