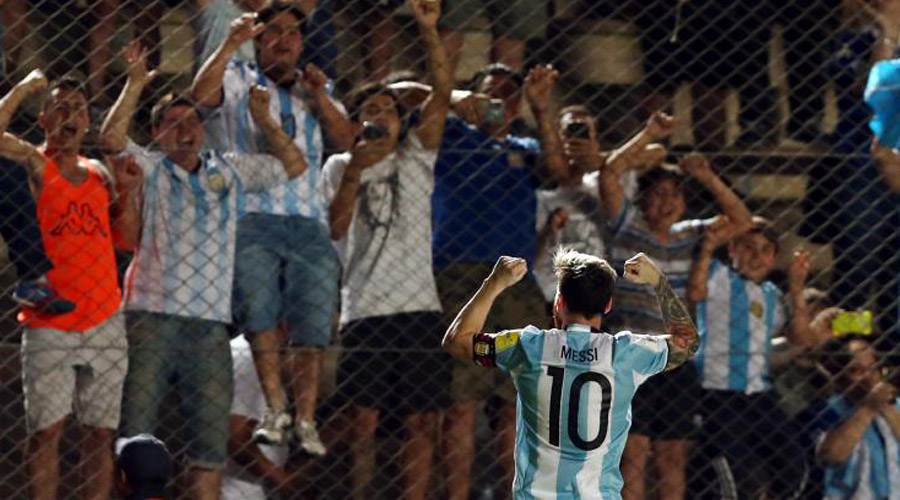 Messi magic puts Argentina back on World Cup track SAN JUAN - A Lionel Messi masterclass, netting a brilliant free kick before laying on two more goals, put Argentina's World Cup qualifying campaign back on track with a resounding 3-0 win over Colombia. The win lifted Messi's team, recovering from two successive defeats, into fifth place in the South American group with 19 points, one behind Ecuador and Chile, who beat Uruguay 3-1 with an Alexis Sanchez brace. Brazil, away to Peru in Lima in a later match, top the table with 24 points while Uruguay are second with 23. Colombia dropped to sixth on 18 points. The top four go through to the 2018 finals in Russia with the fifth, at present Argentina, qualifying for an intercontinental playoff for another berth. "It's hard to analyse (the match) when you concede those kinds of goals and the more so when one team has a player like Messi," said Colombia coach Jose Pekerman. "With the second goal, the match became practically impossible (for us). You try to get goals back but we couldn't and Messi made the difference." Argentina took a ninth-minute lead when Messi curled his free kick over the wall and into the top left corner of David Ospina's net off the underside of the bar for his 57th Argentina goal. Falcao came close for Colombia at the other end when he headed James Rodriguez's free kick just over Sergio Romero's bar after 18 minutes. PRATTO HEADER Five minutes later Messi's superb ball over the defence was met on the edge of the six-yard box with a firm header into the bottom far corner by Lucas Pratto, justifying his inclusion in place of the benched Gonzalo Higuain. Colombia pushed Argentina back in the second half though the home side threatened again when Messi fed Angel Di Maria but his shot from a tight angle hit the post. Di Maria did, however, break a goal drought for his country stretching back eight matches, in the 83rd minute. Messi cheekily stole the ball from a defender, raced into the box and laid the ball square where Di Maria blasted his 18th Argentina goal into the roof of the net. Rodriguez hit the post with a free kick in stoppage time with Colombia's last chance of the match. In Santiago, Sanchez scored twice in the second half as Chile came from a goal down after Edinson Cavani had put the Uruguayans ahead and Claudio Bravo saved a late Luis Suarez penalty. Striker Eduardo Vargas equalised in first half stoppage time and Sanchez put Chile ahead with a shot from the edge of the box then raced in close to tap in his second. Ecuador scored three second half goals in Quito, a header from defender Arturo Mina and strikes from Miller Bolanos and Enner Valencia to beat Venezuela 3-0 and push them back to the bottom of the standings. Bolivia, who had Gabriel Valverde sent off after an hour for a second booking, beat Paraguay 1-0 at home in La Paz thanks to an own goal by Gustavo Gomez. A second successive defeat pinned Paraguay back in seventh with 15 points. -Reuters