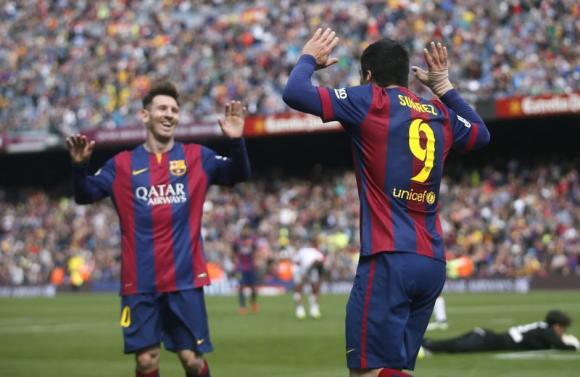 LONDON - Former World Player of the Year Lionel Messi secured a goal-scoring record as Barcelona went top of La Liga with a 6-1 rout of Rayo Vallecano at the weekend. Real Madrid slipped to second after suffering a surprise 1-0 defeat at eighth-placed Athletic Bilbao. In England, Aston Villa became the first side to reach the semi-finals of the FA Cup but their 2-0 win over West Bromwich Albion was marred by ugly crowd scenes at the final whistle. SPAIN Lionel Messi broke a hat-trick record as Barcelona's 6-1 home victory over Rayo Vallecano took them to the top of La Liga following Real Madrid's 1-0 defeat by Athletic Bilbao. Real continued to misfire with attacking trio Cristiano Ronaldo, Karim Benzema and Gareth Bale creating few problems for Bilbao who triumphed thanks to a header by Aritz Aduriz. Barca swept Rayo aside, with Messi hitting his32nd treble for the club, to open a one-point lead. Messi beat the record for the most hat-tricks in Spanish football that he had previously shared with former Athletic Bilbao striker Telmo Zarra. Atletico Madrid remained in third spot, seven points off the pace, after a 1-1 draw with Valencia. ENGLAND Aston Villa capped a good week by reaching the FA Cup semi-finals with a 2-0 win against West Bromwich Albion, a second victory over their Midlands rivals in five days. Villa's delight was marred by a full-scale invasion of the pitch by fans at the end of the game, an incident that could lead to an FA charge. Liverpool were left frustrated as they had to settle for a replay after being held 0-0 at home by Championship side Blackburn Rovers. Giant-killing Bradford City, of League One, and Championship team Reading also shared a 0-0 draw. Holders Arsenal travel to Manchester United on Monday. In the Premier League, in-form Harry Kane scored twice as Tottenham Hotspur kept up their bid to qualify for the Champions League with a 2-1 win at struggling Queens Park Rangers. GERMANY Bayern Munich moved 11 points clear at the top of the Bundesliga with a 3-1 victory at Hanover 96, Thomas Mueller scoring twice including a penalty. Winger Arjen Robben broke the record for registering 100 wins in the fewest Bundesliga matches as he reached the milestone in 126 games. Second-placed VfL Wolfsburg failed to keep pace with the champions, slumping to a surprise 1-0 defeat at Augsburg. Borussia Moenchengladbach squandered a two-goal lead to draw 2-2 at Mainz 05 but held on to third place, two points ahead of Bayer Leverkusen who won 3-0 at promoted Paderborn. ITALY AS Roma failed to make up significant ground on runaway leaders Juventus as they were held 0-0 at struggling Verona, the eighth draw in nine Serie A games for Rudy Garcia's high flyers. Second-placed Roma are eight points adrift of Juve who play their game in hand at home to lowly Sassuolo on Monday. Napoli, in third spot, let slip a two-goal lead as they were held 2-2 at home by Inter Milan while bottom club Parma, playing for the first time in three weeks after being hit by a financial crisis, drew 0-0 with Atalanta. Lazio, in fourth position, also play on Monday at home to Fiorentina who are fifth. - Reuters FRANCE Olympique Lyonnais stayed top of Ligue 1 with a 5-1 win at Montpellier as all the top guns shone over the weekend. Nabil Fekir's double was matched by team mate Alexandre Lacazette, who leads the league goal charts with 23, as Lyon stayed one point ahead of Paris St Germain. PSG thumped RC Lens 4-1 as they warmed up in style for Wednesday's Champions League last-16 return leg against Chelsea at Stamford Bridge. Olympique de Marseille are third on 53 points, four points off the pace, after demolishing Toulouse 6-1. Monaco remained fourth on 47 following a 3-1 win at Evian Thonon Gaillard. NETHERLANDS Champions-elect PSV Eindhoven maintained their 11-point advantage over Ajax Amsterdam at the top of the table with a 3-0 triumph at Go Ahead Eagles Deventer. On target for PSV were Memphis Depay, Jop van der Linden (own goal) and Andres Guardado. Ajax won 1-0 at home to Excelsior thanks to a late strike from Anwar El Ghazi while third-placed Feyenoord beat NAC Breda 3-0 with Mitchell te Vrede scoring twice.