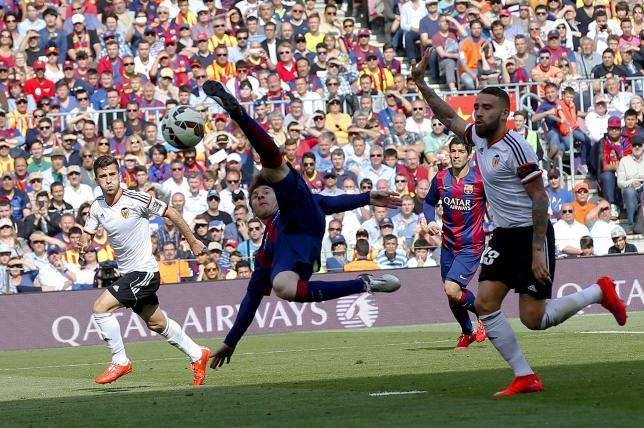 MADRID - Lionel Messi hit his 400th goal for La Liga leaders Barcelona deep into stoppage time to seal a 2-0 win over Valencia on Saturday while Real Madrid maintained their pursuit by defeating Malaga 3-1. Barca have 78 points, two more than second-placed Real, with six games to go. Uruguay striker Luis Suarez continued his lethal form with a clinical low strike inside the area after being set up by Messi with less than a minute on the clock. Suarez's goal followed his midweek double that clinched a 3-1 victory in the Champions League quarter-final first leg at Paris St Germain. Valencia missed a golden chance to equalise against Barca in the 10th minute when Dani Parejo's penalty was saved by Claudio Bravo after Gerard Pique had barged into the back of Rodrigo Moreno. Paco Alcacer also hit the post for the visitors as Barca hung on and then, in a second half played at a slower tempo, Messi struck the woodwork with a free kick before the Argentine finally scored late on the counter attack. "These are moments when you can get involved and save the situation," Bravo told reporters. "We were up against a very strong side in all areas of the pitch and it followed a match in Paris where we had to put in a lot of work. Sometimes you have to do what you can to win a game when your game isn't at its best." James Rodriguez cracked a 25-metre drive into the top corner but Real's win came at a cost with Gareth Bale and Luka Modric going off injured. Real went ahead when Sergio Ramos volleyed home a Cristiano Ronaldo free kick after 24 minutes. CHANCES BEGGING Chances went begging for both sides including a penalty miss by Ronaldo who hit the post after Samuel Castillejo had brought down Rodriguez. Rodriguez extended Real’s lead with a fine effort after 69 minute but they had barely stopped celebrating when Malaga pulled a goal back with a header from the unmarked Juanmi. Javier Hernandez then set up Ronaldo to score from close range in injury time. Bale lasted only two minutes before limping off with an apparent calf injury. He is set to undergo tests as will Modric who was substituted after 59 minutes with a knee problem. "Hopefully they are not too serious and will be fit to play Atletico," Rodriguez told reporters. Real face Atletico on Wednesday with the scoreline 0-0 after the first leg of their Champions League quarter-final. "It was a tough game against Malaga but we won and that is what is important," Rodriguez said. "I have said before that you have to suffer and we are going to fight until the end to try and win the league." Atletico's Antoine Griezmann scored twice, including a spectacular overhead kick, to secure a 2-1 win over Deportivo La Coruna that strengthened their grip on third place. Griezmann struck with a perfectly executed bicycle kick after Jose Maria Gimenez headed the ball back into the box after five minutes played and then made it 2-0 by slotting home a loose ball. Atletico looked firmly in control but lost concentration at the back when Oriol Riera headed in with 12 minutes left and they were put under pressure in the closing stages. Aritz Aduriz's double, the first goal a penalty, led eighth-placed Athletic Bilbao to a 4-0 rout of 10-man Getafe. Getafe defender Emiliano Velazquez was dismissed for upending Borja Viguera and Aduriz netted the resulting spot kick just before halftime. - Reuters