KARACHI (92 News) The Pakistan Meteorological Department (PMD) has issued mild heatwave alert for Karachi. As per details, the mild hot weather conditions are likely to occur for three days, said Pakistan Meteorological Department. Maximum temperature, during the heatwave period, will remain at 41°C. The medical experts have advised people to take precautions in order to keep themselves safe from the heatwave. People should avoid going out from their homes and offices unless important and keep a wet handkerchief at all times. On the other hand, rain lashed different cities across the country. 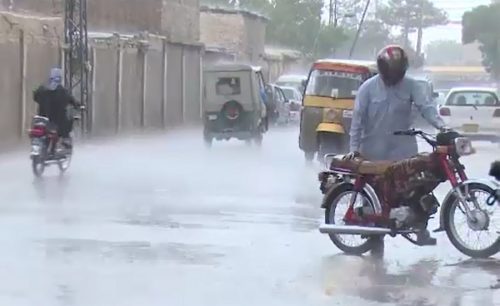 Lahore, Rawalpindi, Nowshehra and Attock received rain. Rain was also reported in Murree,Mianwali and other areas. A shallow westerly wave is affecting western parts of the country and likely to grip upper/central parts of the country. The mountainous areas across the country including Swat, Kalam Valley and surrounding areas received snow fall. Tourists were trapped due to blockage of roads. Locals said that they were facing numerous problems due to blockage roads. They also complained about electricity supply suspension for last two days Snowfall made the weather more chilly.