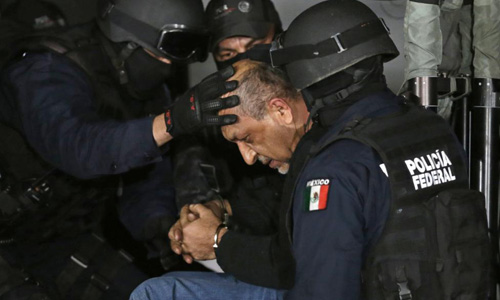 MEXICO CITY (Reuters) - Mexico captured its most wanted drug lord on Friday, former primary school teacher Servando "La Tuta" Gomez, delivering a boost to a government battered by gang violence. The 49-year-old gang boss was the prime target of President Enrique Peña Nieto's effort to regain control of Michoacan, a western state wracked by clashes between Gomez's Knights Templar cartel and armed vigilantes trying to oust them. Peña Nieto has been trying to quell public outrage in Mexico after the late September abduction and apparent massacre of 43 trainee teachers by corrupt police in league with gang members. That incident triggered Peña Nieto's deepest crisis. Attorney General Jesus Murillo, under fire over his handling of that investigation, stood down on Friday and was appointed agrarian and urban development minister. After months of intelligence work, federal police said they captured Gomez and some people with him early in the morning at a house in the Michoacan state capital of Morelia. Police said no shots were fired. Gomez was frog-marched in front of media cameras on Friday evening, his head shoved down by masked federal police officers grabbing the scruff of his neck and leading him to a helicopter to be flown to prison. Officials said there were eight arrest orders for Gomez, including for murder, drug and arms trafficking, extortion and kidnapping. Hitting the campaign trail ahead of local elections, Peña Nieto on Friday paid tribute to Mexico's security forces for capturing "a criminal who was so wanted and who had generated an atmosphere of uncertainty and immense criminality." Last week, police seized many properties in the area and arrested a handful of people connected to Gomez. Officials said police located Gomez by following a messenger to the house in Morelia. Gomez had a trusted network of people who procured food and clothing for him. By following one of those people, police identified a truck registered to one of Gomez's girlfriends. Early on Friday, police detected unusual movements outside the property. Special forces swooped in and nabbed Gomez when he stepped outside wearing a hat and a scarf in an effort to disguise himself. Gomez, a father of at least seven, is wanted by the United States for trafficking methamphetamine and cocaine. The Justice Department said he was also involved in the 2009 murder of 12 Mexican federal police officers. Mexican authorities had placed a bounty of 30 million pesos ($2 million) on his head. Gomez had become less powerful after the capture of many of his lieutenants. Still, his arrest was welcome news, said Antonio Mazzitelli, Mexico's representative to the United Nations Office on Drugs and Crime. "He was a fugitive, living in the jungle," Mazzitelli said. "But it's an important step" for Peña Nieto's credibility. Since the Mexican government began a military crackdown on drug cartels in 2007, more than 100,000 people have been killed in gang-related violence. IN THE PUBLIC EYE   During the bloodshed, no kingpin sought the limelight as often as Gomez, who took to YouTube to rail against political corruption and talked to the media from hideouts. He relentlessly baited authorities. He accused the government of colluding with rival gangs, and defended his Knights Templar as a "necessary evil." In a video posted online in 2012, he sat before images of Ernesto "Che" Guevara and other revolutionary icons and said: "Our only function is to help the people, preserve our state and preserve our country from people causing terror." In another interview, with a wad of dollars poking out of his jeans pocket, Gomez said he became a criminal because teaching primary school had not met his ambitions. Gomez said his cartel followed a strict ethical code. But as time passed, he became more open about the criminal side of a gang that in 2013 had a firm grip on much of the impoverished, mountainous terrain of Michoacan. The government said the Knights Templar extorted many businesses, controlled politicians and diversified from drug trafficking into myriad operations including iron ore exports. Gomez became front man of the Knights Templar after a split within drug cartel La Familia Michoacana, a pseudo-religious gang in which he was also a leading figure. Sporting a goatee and often wearing a baseball cap, Gomez began smuggling marijuana independently in 2001 or 2002 before later joining La Familia, authorities said. His arrest came about a year after authorities captured Mexico's most notorious drug lord, Joaquin "Shorty" Guzman, who headed the Sinaloa Cartel, one of the world's most powerful drug smuggling gangs.