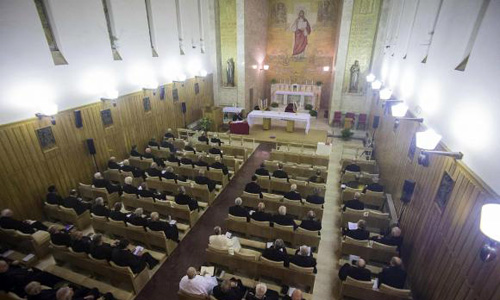 MEXICO CITY (Reuters) - Mexico said on Monday it would send a letter to the Vatican to complain about remarks attributed to Pope Francis about the risk of Argentina suffering a criminal "Mexicanization" due to the spread of drug gangs there. Mexico's Foreign Minister Jose Antonio Meade said his government had expressed concern that the country was being "stigmatized" as a land of drug traffickers in an email attributed to Francis published in Argentina over the weekend. "We had a meeting with the (papal) nuncio and we will indeed send a note, and what worries us is that the drug trafficking challenge is a shared challenge. It's a challenge that Mexico is undertaking massive efforts on," Meade said in Mexico City. Published by Argentine human rights group La Alameda, the email showed the Argentine-born pope making apparent reference to the risk of Mexican-style drug violence reaching Argentina. "Hopefully we're in time to avoid the Mexicanization. I was talking to some Mexican bishops and it's a terrible situation," the organization quoted the pontiff as saying in a message sent to Gustavo Vera, the head of La Alameda. A spokeswoman for the Roman Catholic Church in Mexico said she was still trying to confirm whether the pope had made the comments. An official at the Mexican Foreign Ministry said he believed the papal nuncio had confirmed their authenticity. Vera said the remarks were made by the pope during an exchange the two were having on crime. "In the letter he simply gives expression to a longstanding concern about drug trafficking getting worse and taking root inside (Argentina)," Vera told Argentine radio. More than 100,000 people have died in drug cartel violence in Mexico since the start of 2007. The September 2014 abduction and apparent massacre of 43 Mexican students by police in league with a drug gang seriously embarrassed the current government. Mexican politicians have long argued that the problem is the shared responsibility of Mexico and its neighbors given that the United States is a massive marketplace for illicit drugs.