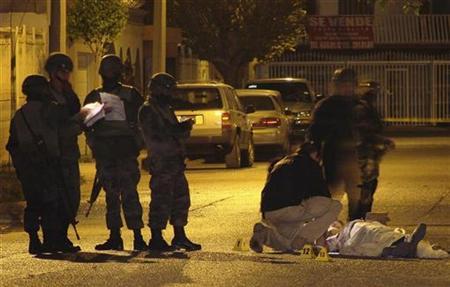 LONDON - Falling homicide rates and dwindling levels of violent and organized crime across Mexico have seen the country become increasingly peaceful over the past four years and boosted its economy, a thinktank said on Thursday. Violence and crime have fallen in 26 of the 32 Mexican states since 2012, yet under-reporting of violent crime and rape and a lack of prosecutions remain worrying, according to the Institute for Economics and Peace (IEP). The Mexico Peace Index, which measured peace since 2003 based on crime rates, police funding and the justice system, said violence cost the Mexican economy an estimated $233 billion last year - worth 17.3 percent of the country's GDP. Mexico has been wracked by drug violence in the past decade. More than 100,000 people have died in clashes between Mexican drug gangs and security forces over the last eight years. The violence has forced more than 21,000 Mexicans to flee the country, and uprooted another 160,000 inside the country, the Norwegian Refugee Council said in December. "The recent improvements in peace have had a beneficial impact on the Mexican economy, however the impact of violence is still three times greater than the total Mexican health budget," Steve Killelea, IEP executive chairman, said in a statement. "Further reductions in violence will improve the likelihood of higher levels of foreign investments and more tourist arrivals thereby creating a virtuous cycle for business." Mexico was now almost as peaceful as in 2007, when homicides and violent crime began to escalate, the index said. In the last two years the homicide rate and the level of organized crime fell by more than a quarter and violent crime was down by 12 percent, but the number of crimes involving weapons increased by 11 percent, it showed. The number of murders relative to the number of prosecutions had doubled to 3.43 in 2013 from 1.45 in 2006, and the rate at which people were sentenced to prison halved between 2003 and 2014, which the IEP called a "disturbing trend". Less than one in 10 cases of rape and one in four assaults are reported to the authorities, the index found. - Reuters