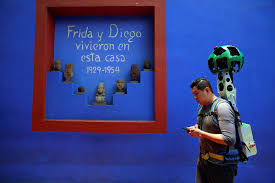 MEXICO CITY (Reuters) – A coil of dark braids. Colorful Mexican dress And a signature unibrow. Sixty-three years after her death, Mexican artist Frida Kahlo has achieved a level of fame she never reached in her lifetime, her image emblazoned on mugs, T-shirts, keychains and even underwear. But scholars and the painter’s descendants lament she has been reduced to a set of distinctive physical features that often overshadows her actual work. The debate heated up this spring when toymaker Mattel released a Barbie in Kahlo’s image, over protests from her family. The Barbie and other merchandise do not capture Kahlo’s complex legacy as a feminist icon, a disabled woman who channeled her pain into art, an ardent communist and an inspiration to the LGBT community, scholars say. “Frida Kahlo is not a product or a brand…. Frida Kahlo is not a doll,” said photographer Cristina Kahlo, the artist’s great niece. “For us, it is important to maintain the image of Frida Kahlo as the painter that she was.” This month, a new project aims to return the focus to her art. Alphabet’s Google, working in collaboration with the Kahlo family, has dedicated a portion of its Arts and Culture app to the artist’s life and work. The search giant partnered with 33 museums to digitize Kahlo’s most famous paintings and bring new work into the public eye. The app also features rare letters, diary entries and sketches, in addition to a virtual tour of her famous blue home. The Kahlo family played an active role. U.S. artist Alexa Meade and Mexican musician Ely Guerra collaborated on a piece of “living art” honoring Kahlo, working under her great niece’s guidance. “These projects that are related to Frida from a cultural point of view, spreading her painting, works and story… are projects I like and feel comfortable participating in,” Cristina Kahlo said. The museums and cultural institutions that Google partnered with managed the rights. Google says no money changed hands. Kahlo’s husband, artist Diego Rivera, established a trust supervised by the Banco de Mexico to operate museums dedicated to the couple’s work, and the trust also oversees the copyright to the works. Kahlo’s brand and image are more contentious. In the early 2000s, one of Kahlo’s nieces, Isolda Pinedo, and her daughter, Mara Romeo, assigned rights to the Kahlo brand to a company known as the Frida Kahlo Corporation, according to court papers. Tension boiled over in March when Mattel released a Kahlo Barbie, licensed by the Frida Kahlo Corporation. In a case launched by family members, a Mexican civil court judge issued a preliminary injunction blocking the sale of the doll and other products licensed by the Frida Kahlo Corporation in Mexico. Mattel asked a federal court to lift the injunction, and a ruling is expected in June, a Mattel spokeswoman said. “This Barbie doll is meant to honor Frida Kahlo’s great legacy and we hope it will be back on shelves in Mexico soon,” Mattel said in a statement. Pablo Sangri Gil, a lawyer for Romeo, told Reuters the Barbie was an example of the Frida Kahlo Corporation operating without consulting with the family, in violation of the rights agreement. In turn, the Frida Kahlo Corporation sued Romeo this month in a Florida federal court, alleging that she violated the contract by licensing Kahlo-branded products of her own. Gil said he had not been formally notified of the Florida lawsuit.