In Miami, Obama to diagnose what ails Obamacare 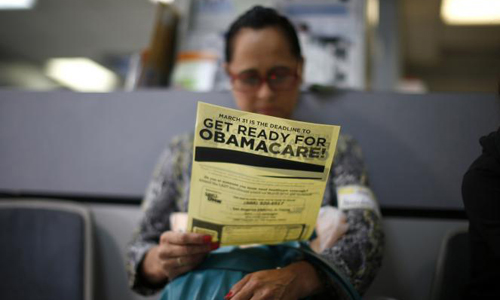 In Miami, Obama to diagnose what ails Obamacare

WASHINGTON- President Barack Obama will head to the election battleground state Florida on Thursday to offer his prescription for fixing the Affordable Care Act, his signature healthcare law, but any remedies will be left up to his successor and the next Congress.
Battling a barrage of negative headlines about rising health insurance premiums and shrinking doctor networks for people participating in the program, Obama is urging more young, uninsured people to sign up for the subsidized insurance plans offered under the law. He also wants to encourage lawmakers to create a government-run health insurance option to help U.S. states where there is little or no competition among private insurers. "That added competition in all 50 states would, we believe, have the effect of further challenging private health insurance companies to improve their offerings and reduce their prices," White House spokesman Josh Earnest said on Wednesday. Obama's Miami speech is scheduled for 1:55 p.m. ET (1755 GMT). He will then headline a rally for Hillary Clinton, the Democratic candidate in the Nov. 8 presidential election, who has said she would add a public option and expand tax incentives for healthcare costs. Republican Donald Trump has pledged to repeal and replace the law. Republicans who control Congress have bitterly fought the 2010 Patient Protection and Affordable Care Act, saying it creates unwarranted government intervention in personal healthcare and private industry. The government forecasts 13.8 million people will sign up for Obamacare plans in 2017, up 1.1 million from 2016. There are 10.7 million uninsured people who are eligible for the exchanges but have not enrolled, and about 40 percent of those are young, Health and Human Services Secretary Sylvia Burwell said on Wednesday. Nationwide, not enough young and healthy people have signed up to provide a revenue stream that offsets the costs of covering members with serious illnesses. As a result, several big insurers, including UnitedHealth Group Inc, Aetna Inc and Humana Inc, are pulling out of the online marketplaces selling the subsidized plans, citing bigger-than-expected financial losses. Monthly premium prices have climbed, which further discourages some people from signing up. "Next year will tell whether those are growing pains, or they are more serious issues," Drew Altman, chief executive of the Kaiser Family Foundation, said in an interview. Analysis conducted by the nonpartisan foundation suggests at least 16 million people need to enroll before the online Obamacare insurance marketplaces stabilize. Obama credits the Affordable Care Act, one of his main legislative achievements, with reducing the number of uninsured Americans from 49 million in 2010 to 29 million in 2015, according to an August article in the Journal of the American Medical Association. Much of the decline is due to the law's provision allowing states to expand Medicaid health coverage for the poor. The law also prohibited insurance companies from denying coverage to Americans if they already had medical problems, and allowed parents to keep children insured on their health plans until age 26. Some health policy experts on both the political left and right say Congress may be more receptive to bipartisan efforts to fix the Affordable Care Act after Obama leaves office. Some Republican governors who refused to expand Medicaid may also be more willing to do so after the election. "I think the piece of Obamacare that people don't like is Obama," Kathleen Sebelius, Obama's former Health and Human Services secretary who oversaw the program's launch, said in an interview. "This has become a very personal battle about this president, which is I think really unfortunate." -Reuters