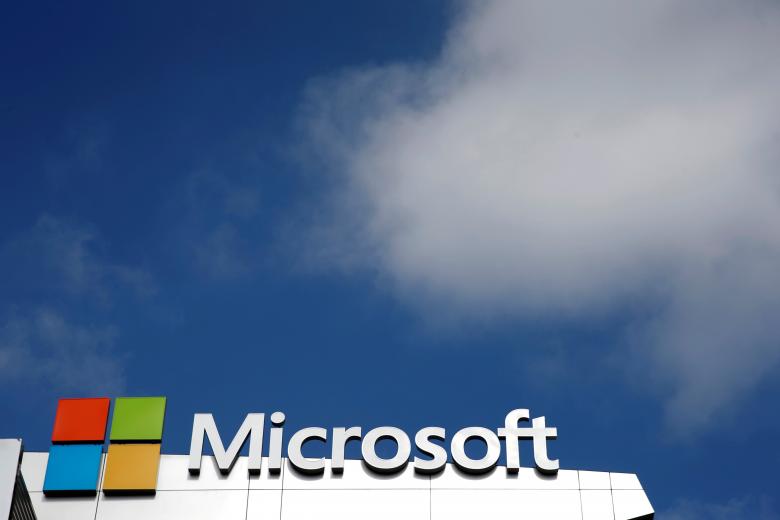 CALIFORNIA - Microsoft Corp said sales of its flagship cloud product doubled in its first quarter, propelling earnings above analysts' estimates and sending its shares to an all-time high, breaking past a level hit in 1999 at the peak of the tech stock bubble. The company's shares have doubled since August 2013 with Chief Executive Satya Nadella restoring investor confidence by focusing on mobile and cloud computing rather than PCs. Long known for its Windows software, Microsoft has shifted focus to the cloud where it is duelling with larger rival Amazon.com Inc (AMZN.O) to control the still fledgling market. Its jump in revenue underscores how businesses around the world are turning to new applications in the cloud and leaving once critical software programs and other hardware in the dust. Shares of Microsoft rose as much as 6.2 percent to $60.79 in after-hours trading. They later pared gains to $60.43, still adding nearly $25 billion (22.87 billion pounds) to its market value. The Redmond, Washington-based company said sales from its flagship cloud product Azure, which businesses can use to host their websites, apps or data, rose 116 percent. Revenue for its broader "Intelligent Cloud" business rose 8.3 percent to $6.38 billion, beating analysts' average estimate of $6.27 billion, according to research firm FactSet StreetAccount. "We are not just building or moving (clients') IT," Nadella said on an analyst call. Customers "are building new digital services for hyper scale. And that's what is probably unique in terms of what has changed year over year for us. "It's not just the Silicon Valley startups anymore; it is the core enterprise that is also becoming a digital company. And we are well-positioned to serve them," he said. The company forecast that sales for its Intelligent Cloud business will be between $6.55 billion and $6.75 billion in the current quarter, compared with $6.34 billion in the same period a year earlier. "There’s a huge runway for them to show growth," said Trip Chowdhry, managing director of Global Equities Research. HEAD IN THE CLOUDS Early investment in the cloud, coupled with machine learning and applications that can scale at different levels, have set Microsoft and Amazon Web Services apart from smaller rivals - and precipitated the decline of older software companies, Chowdhry said. Microsoft had an effective monopoly on computing software in the 1990s and was for some time the world’s most valuable publicly traded company. But its power waned in the 2000s after a bruising battle with the U.S. Department of Justice over how it used its monopoly power to squeeze competitors. Co-founder Bill Gates stepped down as CEO early in 2000 and Microsoft spent the next decade and a half in a strategic dilemma as it clung to its PC-centric view of the computing world while it was outflanked by Google (GOOGL.O) in the internet and Apple Inc (AAPL.O) in smartphones. Earlier this year, Nadella made headlines when he orchestrated Microsoft's biggest-ever deal, agreeing in June to buy the social network for professionals LinkedIn Corp (LNKD.N) for $26.2 billion. But the focus on mobile applications and the cloud's blockbuster growth masked dips in sales for other units of the company in the quarter. Worldwide PC shipments fell 3.9 percent in the quarter ended Sept. 30, according to research firm IDC, although that was much less than the 7.1 percent it had previously estimated. Revenue in the unit that includes Windows software and the company's struggling mobile business fell 1.8 percent to $9.29 billion. Microsoft forecast the division will have sales of up to $11.6 billion in the current quarter - well below the $12.7 billion it posted for the unit a year earlier. The decline in Lumia smartphone sales was a "blemish," said Patrick Moorhead of Moor Insights & Strategy, albeit an expected one. "At some point that Windows number needs to start to rise, but given market declines, it’s hard to expect that," he said. Including deferred revenue from Windows 10, Microsoft earned 76 cents per share in the just-ended first fiscal quarter of 2017, beating analysts' average estimate of 68 cents, according to Reuters. On an adjusted basis, Microsoft reported revenue of $22.33 billion, above the average estimate of $21.71 billion. -Reuters