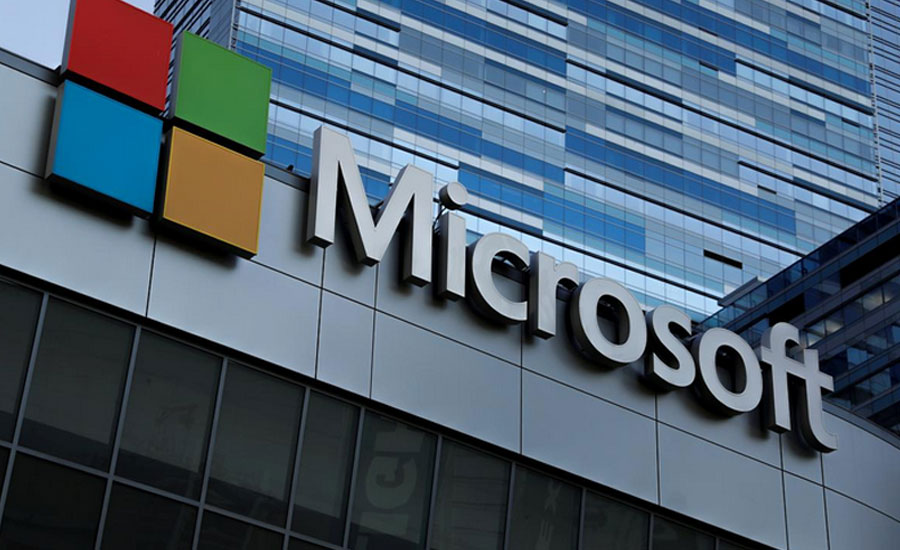 (Reuters) - Microsoft Corp (MSFT.O) on Thursday beat analysts’ estimates for fourth-quarter revenue and profit, driven by continued sales increases from its cloud business and sending its shares to all-time highs.
Since Chief Executive Satya Nadella took over in 2014, Microsoft has been shifting away from its Windows operating system software and toward cloud services, in which customers move their computing work to data centers managed by Microsoft. Revenue growth in Azure was 64% in the fiscal fourth quarter ended June 30, compared with 89% a year earlier and 73% in the prior quarter. Microsoft does not provide an absolute revenue figure for Azure, blending it into its “intelligent cloud unit,” which had revenue of $11.4 billion compared with analyst expectations of $11.0 billion, according to Refinitiv data. Microsoft also forecasted between $10.3 billion and $10.5 billion in intelligent cloud sales for the fiscal first quarter, with a midpoint above analyst estimates of $10.13 billion. The forecast helped send shares of Microsoft up more than 2.6% to record highs above $140 in after-hours trading. Cloud growth powered Microsoft’s market value past $1 trillion for the first time in April. On Thursday, Microsoft’s Azure-based business segment for the first time ever reported slightly more quarterly revenue than its Windows-based segment. “The pressure was obviously on but they executed,” said Hal Eddins, chief economist for Microsoft shareholder Capital Investment Counsel. “The cloud is such a key driver of growth for them and they seem to have painted a big bullseye on the back of AWS.” In the cloud computing business, Azure’s chief rival is Amazon Web Services, which dominates the industry with a 32.8% market share, according to research firm Canalys. Microsoft has a share of 14.6%, while Google has 9.9%. Microsoft has also gained ground in the past year by bundling its Azure computing service for developers along with Office and other software products for end users, such as in the more than $2 billion cloud deal it signed with AT&T Inc (T.N) earlier this week. Microsoft has tried to set itself apart from AWS by combining its traditional software that runs in a customer’s own data center with its Azure products, a strategy that Chris Voce, analyst at Forrester, said helped power the company’s results. “Its hybrid cloud strategy has resonated with enterprises where this is a more realistic and flexible approach,” Voce said. Revenue in Microsoft’s productivity software unit jumped 14.3% to $11.05 billion, driven by double-digit revenue growth for LinkedIn and Office 365. Analysts on average had expected revenue of $10.71 billion, according to IBES data from Refinitiv. Meanwhile, its personal computing division, home to Windows software, rose to $11.3 billion, compared with analyst estimates of $10.98 billion. The unit also includes Xbox gaming consoles, the Bing online search service and Surface laptops. Mike Spencer, head of investor relations at Microsoft, said Windows results were fueled by customers upgrading from Windows 7, which will be retired next year, and the result of some PC customers stockpiling inventory in anticipation of possible tariffs. “What we’ve seen is there was even maybe more pent-up demand than we anticipated,” Spencer said. He said the company did not feel any impact from sales restrictions placed on Huawei Technologies Co Ltd [HWT.UL] by the U.S. government. Microsoft's net income rose to $13.19 billion or $1.71 per share in the fourth quarter, from $8.87 billion or $1.14 per share a year earlier. Excluding items, the company earned $1.37 per share, topping estimates of $1.21 per share. Total revenue rose 12% to $33.72 billion, above average analysts’ estimates of $32.77 billion.