Mideast's arch-survivor stands in way of Saudi success in Yemen 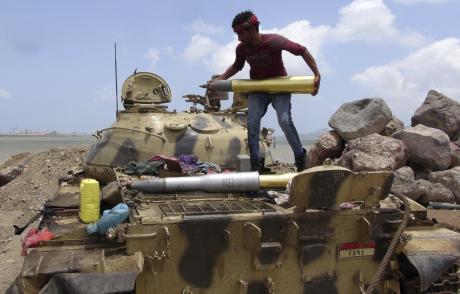 Mideast's arch-survivor stands in way of Saudi success in Yemen

DUBAI - Three weeks of Saudi-led airstrikes in Yemen have led to defections of army units loyal to former president Ali Abdullah Saleh, military sources said, dealing a blow to his efforts to stage a comeback. Saleh has teamed up with his old foes, the Iranian-allied Houthis, against his former backer Saudi Arabia, displaying the political skill that enabled him to rule the heavily armed and fractious country for more than three decades. Saudi Arabia launched the air attacks last month as Houthi rebels, who had taken control of the capital Sanaa in September, closed in on the port city of Aden and forced Yemeni President Abd-Rabbu Mansour Hadi to flee to Riyadh. The Houthis and pro-Saleh army units have been fighting alongside each other on several fronts against militia forces loyal to Hadi. But Yemeni military sources said the Saudi-led bombing campaign has already led five pro-Saleh military brigades to defect. One of those battled Houthis in the province of Taiz on Wednesday, they said. Further splits could weaken Saleh and help Saudi Arabia and its allies beat back the Houthis, who are engaged in street battles for control of Aden. "There have been announcements by units that they are defecting from him and there are real changes in that regard. This is the probably the most effective way the Saudis could succeed," said a Yemeni politician opposed to the Houthis, who asked not to be named due to security concerns. "(Saudi Arabia) has been bitten so many times they won't take a risk by seeking an agreement with him, which would only play into his hands," he added. Saudi military spokesman Brigadier General Ahmed Asseri has said the coalition was in contact with leaders of military units who have pledged loyalty to Hadi. It was not clear precisely why they changed sides. "The plan for now is to just keep putting pressure on him on the ground till (Saleh) agrees to surrender," a Saudi source said. For his part, Saleh has dismissed allegations that he backs the Houthis and has called on all sides to open a dialogue. Farea al-Muslimi, a researcher at the Carnegie Middle East Center, told Reuters the air strikes had harmed Saleh more than the Houthis as the army bases were more of a clear target and have suffered huge damage. "The Houthi-Saleh front remains united but if this dynamic changes, it would have a major impact on where the conflict goes," Muslimi said. HISTORY OF INTRIGUE Pressure alone may not be enough to break a man who has managed to play his enemies off against each other as tribal warfare, separatist movements and Islamist militants destabilized Yemen. He survived a bomb attack in his palace mosque in 2011 which killed senior aides and disfigured him. As other leaders were toppled by the Arab Spring uprisings, he found a way to retire peacefully to his villa in the capital and plot a comeback. Despite being forced to step down in 2012 under a Gulf-brokered transition plan following protests against his rule, Saleh won immunity in the deal and has remained a powerful political player operating behind the scenes. His first order of business was to get back at a former right-hand man in the military and a tribal leader whom he blamed for the palace blast. They were easily forced into exile when the Houthis swept into Sanaa in September unopposed by army loyalists. After President Hadi succeeded in securing U.N. sanctions against Saleh, he turned his guns against his Saudi-backed successor. But the alliance between the Saleh loyalists and the Houthis, who are Shi'ite Muslims from the north, is plagued by historical mistrust which may benefit Saudi Arabia and its Arab allies. Saleh waged six wars against the Houthis from 2002 to 2009, and the group fears the Saudi drive for defections could even see Saleh on Riyadh's side once again. "Ali Abdullah Saleh is a fickle person - if he thought he could stand against us now without failing, he would, but he's afraid," Houthi politburo member Mohammed al-Bukhaiti told Reuters by telephone from Sanaa. Analysts believe Saleh's plan appears to be to help the Houthis defeat their common enemies then to use his political base to build a role as powerbroker before turning on the rebel group and installing his son Ahmed Ali Saleh as president. If the Saudi-led bombing reverses Houthi battlefront gains, more Saleh loyalists may be tempted to switch sides. "Most of the leaders of the military are just going with the tide," the Yemeni politician said. "If the progress of the war were seen going clearly against him and the Houthis they would begin to desert him." But Saleh has proven in the past that attempts to map out Yemen's future without him are doomed to failure. "When the dust settles, Saleh will have to be included in any future settlement, likely with his son getting a significant position," said Kamran Bokhari of Stratfor global intelligence firm. - REUTERS