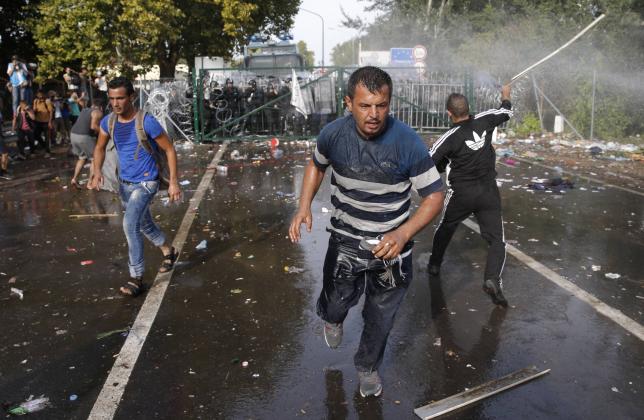 SID, SERBIA/ROSZKE, HUNGARY – Riot police fired water cannon and tear gas at migrants demanding to be let through Hungary's newly shut EU frontier on Wednesday, while refugees at other Balkan borders clambered through cornfields in search of new routes. Hungary's decision to shut the EU's external border with Serbia this week was the most forceful attempt yet by a European country to close off the unprecedented flow of refugees and economic migrants overwhelming the bloc. It has left thousands of migrants scattered across the Balkan peninsula seeking alternative ways to reach the EU. Helmeted Hungarian riot police backed by armored vehicles took up positions at the now-barricaded border crossing with Serbia, where male migrant youths pelted them with stones, demanding to be allowed through. The border has until now been the main route for migrants, who mainly arrive first by dinghy in Greece and then trek across the Balkan peninsula to reach the EU's frontier-free Schengen zone, most bound for Germany. Migrants scattered through Balkan countries said they were searching for other routes, possibly through Croatia or Romania, both of which are in the EU though not in Schengen. “We have passed too much to give up now. If not Hungary, we will have to find another way. Most probably Croatia and from there we will see,” said 43-year-old Mehmed from Damascus, holding his 3-year-old daughter after crossing the border north into Macedonia from Greece. In response, Romania's Prime Minister Victor Ponta evoked the continent's darkest era. "Fences, dogs, cops and guns, this looks like Europe in the 1930s. And did we solve the refugee problem with this? No, we didn't," he said. "Erecting a fence only throws the problem into Serbia, into Croatia, into Romania." At the Croatian border with Serbia, Reuters reporters saw hundreds of people, some of whom identified themselves as Iraqis, trek through fields near the official Sid border crossing. They arrived by bus from the southern Serbian town of Presevo, rerouted late on Tuesday to the Croatian border after the Hungarian border shut. DISCORD The biggest flow of immigrants into Western Europe since World War Two has sown discord across the continent, fuelling the rise of far right political parties and jeopardizing the 20-year-old achievement of Schengen's border-free travel. Hungary says it is simply enforcing EU rules by sealing the Schengen zone's external border. It says Serbia is a safe country, so asylum seekers who reach the frontier there can be automatically turned back in a process that should take hours. The United Nations says Serbia lacks the capacity to receive refugees halted at the gates of Europe. Critics at home and abroad say Hungarian Prime Minister Viktor Orban's anti-immigrant rhetoric has crossed the line into xenophobia. The crisis has pitted countries that are comparatively open, led by Germany, against those, many in former Communist eastern Europe, who argue that the welcoming approach has made the problem worse by encouraging people to make dangerous voyages. Hungary blames Germany for exacerbating the crisis by announcing in August it would suspend normal EU asylum rules and take in Syrian refugees regardless of where they enter the EU. Thousands have since been trekking across the bloc, mainly through Hungary and Austria, to reach Germany, clogging railway stations and forcing trains to be canceled. MUNICH OVERWHELMED Germany ordered the emergency reintroduction of border controls on Sunday to divert migrants away from Munich, the southern city that had been overwhelmed by tens of thousands arriving within days. Austria and Slovakia said Germany's move left them no choice but to impose similar controls. An emergency meeting of EU ministers failed this week to reach agreement on a Berlin-backed plan to share out 160,000 refugees across the bloc. A German cabinet minister said on Tuesday the EU should consider financial penalties against countries that refuse to take their share, drawing angry responses from countries which oppose quotas, such as the Czech Republic and Slovakia. Croatia said it would allow migrants who arrive in Serbia to continue onwards. Its border with Slovenia offers migrants a new route into the Schengen zone. “Croatia is entirely ready to receive or direct those people where they want to go, which is obviously Germany or Scandinavian countries," Prime Minister Zoran Milanovic said. "Many in Europe boast that they are Christians but behave otherwise. Walls will stop nobody and will not help," Milanovic said, a thinly-veiled swipe at Hungary's Orban, who has said he is defending Europe's "Christian values" from Muslim migrants. There was little sign so far that the new difficulty crossing the Balkans was slowing the flow of migrants out of Turkey, which has been housing 2 million Syrian and Iraqi refugees. Hundreds of migrants, mainly Syrians, spent a night out in the open near Turkey's land border with Greece after Turkish police blocked them reaching the frontier. "I am young I am strong, if I can make it to Europe perhaps I can have a life. We have degrees, we have education, there's nothing for us here in Turkey," said 25-year old Saleh, an electronics engineer from the Syrian city of Aleppo. Croatia said it would send landmine experts to its Serbian border to identify minefields left on the frontier from the Balkan wars of the 1990s, the last time hundreds of thousands of displaced people marched across Europe. The goal for most is Germany, which cut off trains from Austria on Wednesday to slow the flow of arrivals. Tens of thousands of migrants have reached Austria in recent days, rushing to cross before Hungary fulfilled its plan to shut the frontier. Austria said it would impose new border controls on its frontier with Slovenia, along the likely new route from Croatia. –Reuters