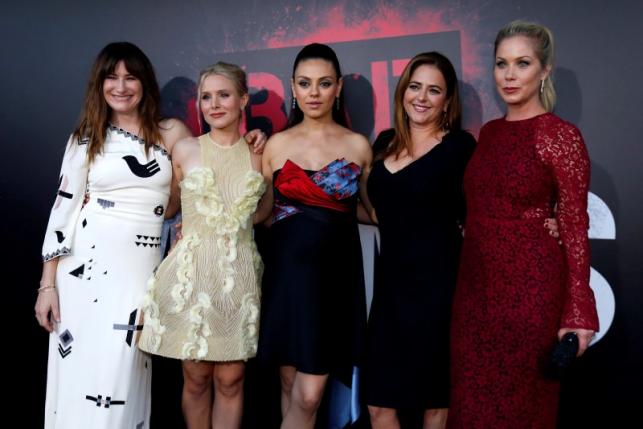 LOS ANGELES - Actresses Mila Kunis, Kathryn Hahn and Kristen Bell were in Los Angeles to premiere "Bad Moms," a film that brings a string of female stars together to take digs at the modern day perils of parenting. Kunis, who is pregnant with her second child, paid homage to her co-stars, saying: "This group of women are unbelievably inspirational. When I signed on to the project it was the first movie I decided to do after having Wyatt and I was so nervous about going back to work with these 17-hour-long days and if not for these girls, I don't know how I'd have got through it." The film follows three 'bad moms,' Amy (Kunis), Kiki (Bell) and Carla (Hahn), who decide to break away from their responsibilities and have some freedom and fun for a change. However, their attempt at freedom is looked on with disdain by straight-laced Gwendolyn (Applegate) and Stacy (Jada Pinkett Smith). "We're all kind of more the bad moms rather than the Gwendolyns. I'm more of a Gwendolyn than I knew," Applegate said of her co-stars, all of whom are mothers. "I'm very type A, I'm really controlling about everything and through this movie, I've learned that I really have to step back and have some time for me because you can sometimes lose your identity from trying to be perfect." "The good news about this movie is you can take out the word 'bad' and put just 'Real Moms.' None of these ladies are bad moms," said Kathryn Hahn, who plays the most care-free of the "Bad Moms." "I certainly play a character, however, who is certainly unshackled from feeling any sort of guilt or shame about her 'me time' which is 24 hours a day." Although the film is centered on women and motherhood, it was written and directed by two men - Jon Lucas and Scott Moore, who wrote 'The Hangover' film, released in 2009. "You never would have known it was two guys who wrote this script when you read it," admitted Bell. "It was so authentic. It was so accurate. They nailed it." "Bad Moms" goes on release in North America on Friday, July 29. -Reuters