Militants kill five in attack on restaurant in Mali capital 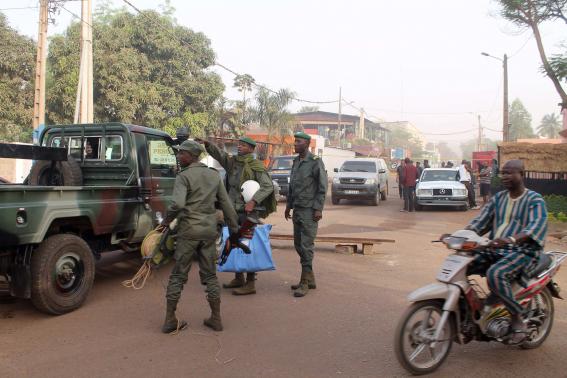 Militants kill five in attack on restaurant in Mali capital

BAMAKO - (Reuters) - Militants killed five people in a gun attack on a restaurant in Mali's capital in the early hours of Saturday, including a French citizen and a Belgian security officer with the EU delegation in the country, authorities said. Mali's desert north, where French forces wrested control of territory from separatist rebels and al Qaeda-linked fighters, is plagued by frequent attacks. But this is the first such attack for years in Bamako in the south and raises fears that the capital will become targeted more by militants. Three Malians were killed in and around La Terrasse restaurant, the government said. The attack began and left nine people wounded, said a senior security official, adding that two people had been arrested. "There were two individuals who were armed and hooded. One burst into the La Terrasse restaurant and opened fire on people. Then he got into a vehicle in which the other was waiting," said senior police officer Falaye Kanté. "As they fled down a neighboring street, they shot a Belgian man who was in front of his house. He's dead. Not far away they came across a police vehicle and threw a grenade, killing the driver," he told Reuters. Those killed included a girl who died in hospital, Kanté said. Witnesses said police had secured the street where the restaurant shooting took place because of unexploded grenades. Two international experts with the United Nations Mine Action Service (UNMAS) were among the wounded, according to initial reports, said Mongi Hamdi, U.N. special envoy for the peacekeeping mission to Mali (MINUSMA). Two Swiss army personnel were wounded and brought to hospital where they are in a stable but critical condition, said a statement from the Swiss Armed Forces International Command. One worked for UNMAS and the other is part of a fact-finding mission, it said. NIGHT LIFE The restaurant popular with expatriates is situated on one of the busiest streets for night life and entertainment in Bamako. La Terrasse is a semi-open air place upstairs in a building that also houses the Cotton Club nightclub. Malian President Ibrahim Boubacar Keïta toured the site on Saturday in the aftermath of the attack. "The Malian government has opened an enquiry and is determined to keep going until those guilty are found and punished as they deserve," a government statement said. In Paris, French President Francois Hollande's office said he had spoken with Keita and that they had agreed on new "common measures" to reinforce security in Mali. The statement gave no details on the measures. French forces took control of northern Mali two years ago but insurgents continue to mount attacks. France has more than 3,000 soldiers in West Africa as part of the counter-insurgency force against al Qaeda-linked militants. Mali's government signed a preliminary peace proposal last Sunday meant to end fighting with northern separatists, but the Tuareg-led rebels demanded more time before agreeing to any accord. European Union foreign policy chief Federica Mogherini said one of the victims in Saturday's bombing was a Belgian security officer with the EU delegation in Bamako. "The European Union will not be intimidated by terrorism," said Donald Tusk, President of the European Council. US Secretary of State John Kerry also condemned the attack and said it strengthened US resolve to fight terrorism.