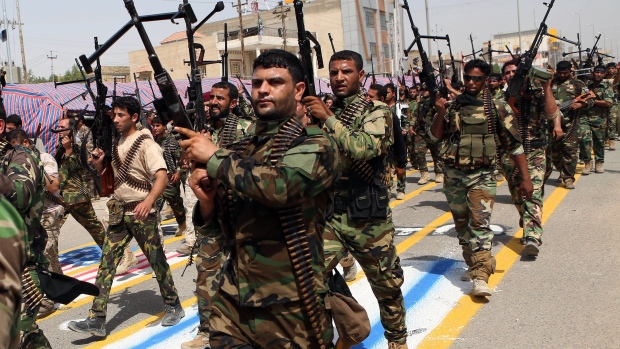 LONDON - Iraqi Shi'ite militias unleashed a campaign of "deliberate and wanton destruction" as they rampaged through dozens of villages last year after driving Islamic State fighters out of the northern town of Amerli, rights activists said on Wednesday. The militias, along with Iraqi security forces and volunteer fighters, ransacked, torched, bulldozed and blew up thousands of Sunni homes and businesses, Human Rights Watch said. Shi'ite militias have teamed up with Iraqi government forces and Kurdish peshmerga fighters to dislodge Islamic State, the hardline Sunni Islamist group which has seized swathes of northern and central Iraq. But HRW warned that militia abuses were exacerbating sectarian grievances in the deeply divided country. It said militias and government forces had destroyed over 75 percent of buildings in at least 18 villages surrounding Amerli, including schools, mosques and clinics. At least 11 men were abducted, the rights group said, but residents reported many others had gone missing. HRW called for Iraq's Shi'ite-led government to disband the militias and urged the United States, Iran and other countries supporting its fight against Islamic State (ISIS) to ensure operations did not pave the way for such abuses. "Iraq can't win the fight against ISIS's atrocities with attacks on civilians that violate the laws of war and fly in the face of human decency," said Joe Stork, HRW's deputy Middle East and North Africa director. "Militia abuses are wreaking havoc among some of Iraq's most vulnerable people and exacerbating sectarian hostilities." He warned there was a risk that the militias could commit similar abuses around Tikrit where they are helping in a major offensive to wrest the city from Islamic State control. The militant group laid siege to Amerli, a farming town 170 kilometers (100 miles) north of Baghdad, last June.HRW said the militias went on the rampage after helping to dislodge the Islamists in early September following US and Iraqi air strikes. Kurdish peshmerga officers who took part in the Amerli operation told HRW they had seen 47 villages where militias has destroyed and ransacked property, the report said. Militias looted refrigerators, televisions and clothing before setting homes ablaze. They also stole livestock and destroyed farmland, ruining livelihoods and making it even harder for residents to return home, the report added. Militias named in the report include the Badr Brigades, Asa'ib Ahl al-Haqq, Kita'ib Hezbollah and Saraya Tala'a al-Khorasani. SATELLITE IMAGERY Witnessed told HRW researchers they believed the destruction was driven by revenge and intended to alter the demographic make-up of Kirkuk and Salah al-Din provinces. Using satellite imagery, HRW identified over 3,800 destroyed buildings in 30 towns and villages. Of these, it said 2,600 were likely to have been destroyed by fire and 1,200 with heavy machinery and explosives. The destruction, which mostly occurred between early September and mid November, appeared to represent collective punishment against residents of Sunni villages, HRW said. It urged Prime Minister Haider al-Abadi to take immediate steps to protect civilians in areas where militias are fighting and to bring to account those responsible for serious crimes. Stork said the abuses committed by forces fighting Islamic State were "so rampant and egregious" that they threatened Iraq's future. "Iraqis are caught between the horrors ISIS commits and abusive behavior by militias, and ordinary Iraqis are paying the price," he added. - Reuters