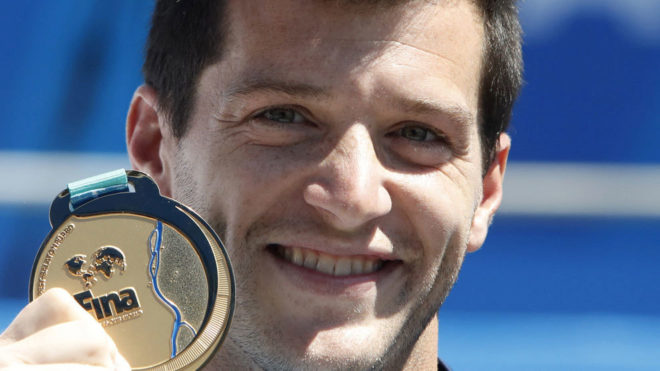 BUDAPEST - Steve LoBue admitted to a "surreal moment" as he became the first American to win gold in the men's 27 meters high diving at the world championships on Sunday.

LoBue's career-high victory came two years after he was hailed as a "miracle man" after hitting his head on the diving platform at a cliff diving event in France.

The 32-year-old rallied from fourth place after the first two rounds to claim gold with 397.15 points at a specially-constructed six-meter pool in the River Danube.

He beat Michal Navratil of the Czech Republic by 6.25 points, with Alessandro De Rose of Italy taking bronze.

"When hundreds of hours of training come together in the three seconds it takes to jump from 27m, I couldn't be happier," LoBue told a news conference.

"It is a surreal moment and I'm looking forward to a nice month of rest with my family before competing again."

In 2015, the South Florida-based diver hit his head during a routine in La Rochelle but completed the dive and then emerged from the competition with just a facial cut and bandage over his left eye.

Reflecting on the incident, LoBue said: "There are a lot of people who may have succumbed to the fear but I had to complete that dive two weeks later."

In Sunday's final, defending champion Gary Hunt had held a slender 2.65 point lead over LoBue heading into the final round. The Paris-based diver was title favourite having won the cliff diving series for the last six years.

Considered high diving's most difficult routine, Hunt attempted a forward three somersault and four-and-a-half twist with a running take off for his final dive. However, the judges marked the Briton down for over-rotation on entry and he placed fifth. "We never want to see someone mess up but this time I am overjoyed it worked in my favour," added LoBue. -Reuters