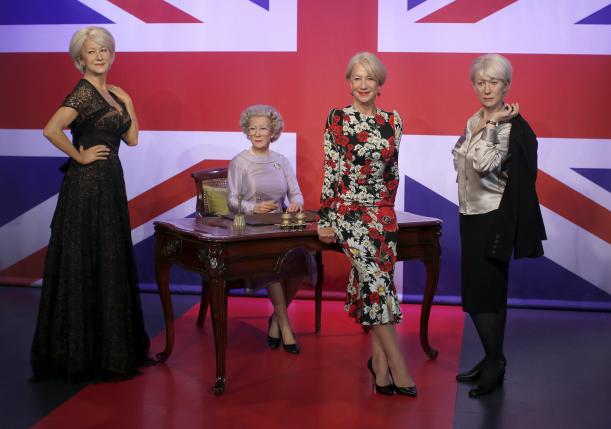 LONDON - "Spot the fake!" British actress Helen Mirren joked as she posed with not one but three wax figures of herself, including as her Academy Award winning "The Queen" role. London's Madame Tussauds wax museum has put up a display of the figures to commemorate the actress' 70th birthday. Mirren is portrayed in two of her award-winning roles, as detective Jane Tennison in the television series "Prime Suspect" and as Britain's Queen Elizabeth II in "The Queen" sitting at her desk. The third figure is of Mirren on the red carpet, wearing a black dress she donated. The actress had unveiled that figure in 2010 but said she had never seen the character models before. "It's like having three sisters," Mirren, who recently won her first Tony award for her role as Queen Elizabeth in "The Audience", said as she visited the figures on Thursday night. "I've got one sister who I absolutely adore, so this is like having three more." In New York, Madame Tussauds unveiled its latest celebrity addition - Hollywood actress Scarlett Johansson. The museum presented a red carpet version of the "Lost in Translation" actress, dressed in a black evening gown, smiling and looking over her shoulder on Times Square. - Reuters