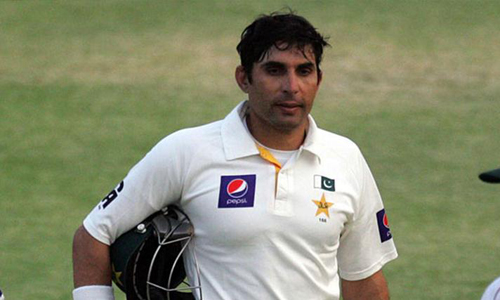 CHRISTCHURCH- Captain Misbah-ul-Haq is to return to Pakistan from their tour of New Zealand after his father-in-law passed away after being admitted to hospital and placed in intensive care. Misbah was missing from the post-match formalities after his side lost the first test by eight wickets to New Zealand at Hagley Oval in Christchurch on Sunday. Vice-captain Azhar Ali, instead addressed the media and said their inspirational captain was heading home to deal with the issue. "Unfortunately his father-in-law is very serious and he has to go back," Ali said. "Hopefully things turn out well." Pakistan manager Wasim Bari later told cricket website ESPN Cricinfo that it was debatable whether Misbah would be back in time for the second test starting in Hamilton on Nov. 25, as it would depend on the situation once he reached Pakistan. Azhar, however, suggested Misbah would probably not be back in time. "We'll miss him definitely," Azhar said. "We have to cope with that now and whoever comes into the side will take that opportunity and give us runs, as well as the stability he gives us in the middle." -Reuters