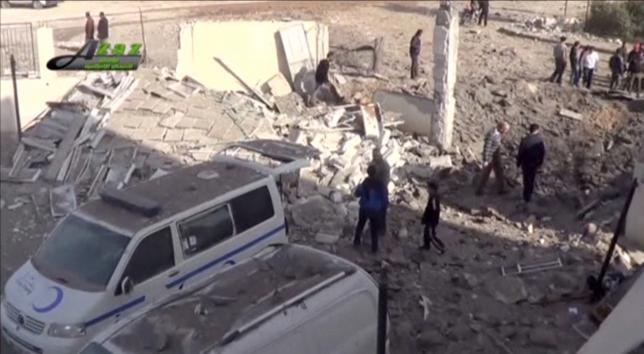 AMMAN – At least 23 civilians were killed when missiles hit three hospitals and a school in rebel-held Syrian towns on Monday, residents said, as Russian-backed Syrian troops intensified their push toward the rebel stronghold of Aleppo.

Fourteen people were killed in the town of Azaz near the Turkish border when missiles slammed into a school sheltering families fleeing the offensive and the children's hospital, two residents and a medic said.

Bombs also hit another refugee shelter south of the town and a convoy of trucks, another resident said.

"We have been moving scores of screaming children from the hospital," said medic Juma Rahal. At least two children were killed and scores of people injured, he said.

In a separate incident, missiles hit another hospital in the town of Marat Numan in Idlib province, in north western Syria, said the French president of the Doctors Without Borders/Médecins Sans Frontières (MSF) charity, which was supporting the hospital.

"There were at least seven deaths among the personnel and the patients, and at least eight MSF personnel have disappeared, and we don't know if they are alive," Mego Terzian told Reuters.

"The author of the strike is clearly ... either the government or Russia," he said, adding that it was not the first time MSF facilities in Syria had been attacked.

The Syrian Observatory for Human Rights, which tracks violence across the country, said one male nurse was killed and five female nurses, a doctor and one male nurse are believed to be under the rubble in the MSF hospital.

Also in Marat Numan, another strike hit the National Hospital on the north edge of town, killing two nurses, the Observatory said.

Residents in both towns blamed Russian strikes, saying the planes deployed were more numerous and the munitions more powerful than the Syrian military typically used.

But Moscow has said it is targeting "terrorist groups" and dismissed any suggestion it has killed civilians since beginning its air campaign in support of President Bashar al-Assad's forces in September.

The town of Azaz has been the scene of fierce fighting as Kurdish anti-government forces advance from the west. They have reached the edge of town, only a few kilometers away from the main Bab al Salam border crossing. The Syrian army is advancing from the south.

Both the Kurds and the army want to wrest control of that stretch of border with Turkey from the insurgents that currently hold Azaz.

Russian bombing raids on rebel fighters are helping the Syrian army to advance toward Aleppo, the country's largest city and commercial center before the conflict. If the army takes the city, it will by the Syrian government's biggest victory of the war. –Reuters