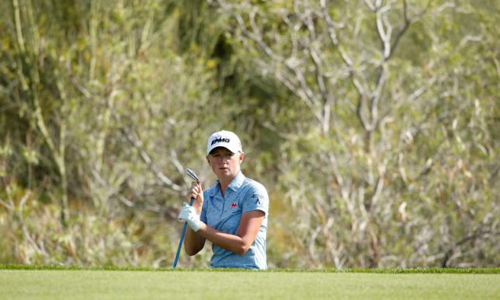 CALIFORNIA - Eight years ago, Stacy Lewis was an amateur when she tied for fifth at Mission Hills Country Club in the first women's major of the season, a tournament she has grown to love. In 2011, the American overhauled the world number one Yani Tseng in the final round at Mission Hills to claim her first major crown, and this week she will be bidding to extend her career tally of grand slam wins to three. "I'm excited to be back," world number three Lewis, 30, told reporters on the eve of Thursday's opening round of the ANA Inspiration. "Any time you come to a course that you've won on, you have some great memories. "It's fun to be back. And the first major of the year ... everybody is always really excited for. My mind-set is good. I've been building on this tournament really since February. "We've been progressing with my golf swing and just working on little things every single week. I like where my game is at." Lewis, who won her second major at the 2013 Women's British Open, has made a habit of excelling at Mission Hills where she has recorded four top-five finishes in eight starts. "I love major championships," the Texan smiled. "It's a hard golf course but if you really are excited to be here and you really love the golf course, it doesn't seem quite so hard. I've liked the challenge. "It's crazy the history of this event," Lewis said of the ANA Inspiration, which was previously sponsored by Kraft Nabisco before ANA took over. "It means the world to me. It's my favorite major of the year. I love the celebration, I love the walk up 18. There are just so many good things about this event." The most notable celebration of the week takes place at the par-five 18th where an island green is surrounded by Poppies Pond and it has become a tradition for the winner to make a celebratory leap there into the water. "I think it's the greatest celebration in golf," said Lewis, an 11-times winner on the LPGA Tour. "It's something that as a little kid you see these players just so genuinely excited, acting like you. They're acting like a little kid, just jumping in a pond." - REUTERS