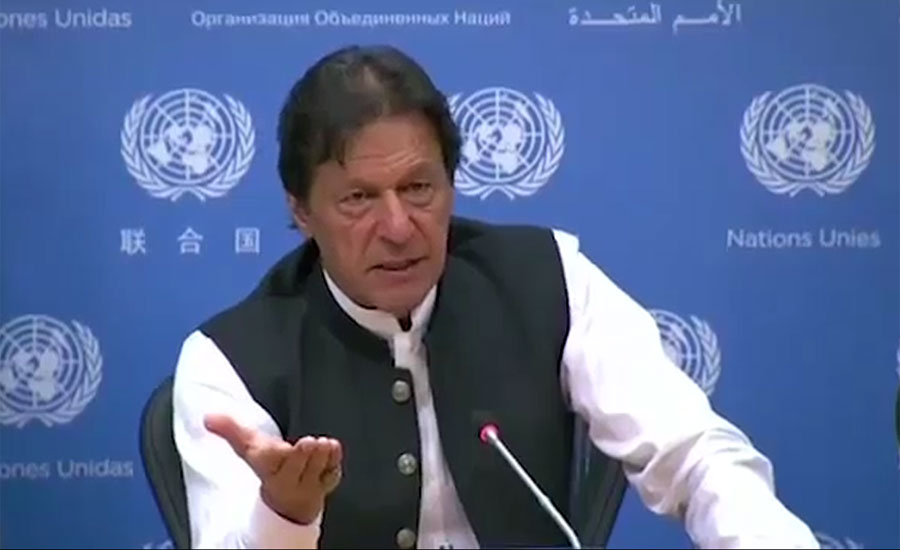 NEW YORK (92 News) – Prime Minister (PM) Imran Khan – who is on Mission Kashmir in New York – will address UN General Assembly (UNGA) today (On Friday), drawing world attention to emerging humanitarian crisis in Indian Occupied Kashmir (IoK). During the address, his message will be clear to find a peaceful solution for the Kashmir issue. He will also highlight the plight of the Kashmiri people who continue to suffer a suffocating lockdown. It is noteworthy that the prime minister will raise the voice for Kashmiris as the ambassador of Kashmir and currently on the mission Kashmir in US. Imran Khan will also meet with United Nations Secretary General António Guterres today. Prime Minister Imran Khan met Russian Foreign Minister Sergei Lavrov on the sidelines of 74th Session of the UN General Assembly in New York. They expressed their satisfaction about Pak-Russia bilateral relations. They discussed various aspects to promote bilateral cooperation. Both dignitaries discussed the Afghan peace process and overall security in the region.

PM Khan fears bloodshed is expected in IoK after India lifts curfew. He says India has made eight million Kashmiris captive for the last 54 days as the entire valley is locked down. “I am not hurling war threat to the world but am forewarning possibility of any misadventure if the world powers don’t intervene into the occupied valley,” he said while addressing the ceremony of Asia Society and answering questions of the participants in New York. The premier said in case of war in the region, an increase in crude oil prices will enhance poverty. In an interview with MSNBC, an American TV, PM Khan said that no sane person can think of a nuclear war. “I think that there is need to stop the affairs headings to the dangerous direction. I fear a massacre soon after lifting of curfew in Occupied Kashmir. For this reason, I am demanding mediation of Trump,” he said. Prime Minister Imran Khan said that the condition will go out of control if the matter was not intervened. “I have visited the United Nations to apprise the international community of the threat,” he said. The prime minister said that the war is not a solution to any issue and for this reason, he is opposed to it.