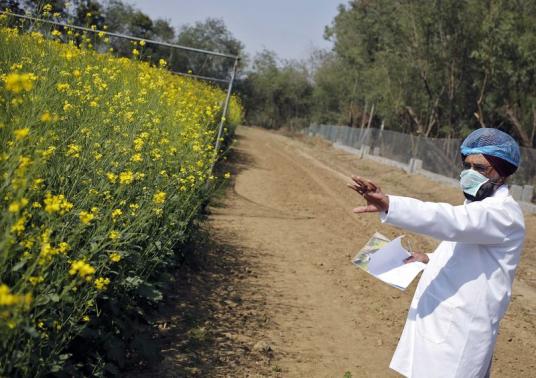 NEW DELHI (Reuters) - On a fenced plot not far from Prime Minister Narendra Modi's home, a field of mustard is in full yellow bloom, representing his government's reversal of an effective ban on field trials of genetically modified (GM) food crops. The GM mustard planted in the half-acre field in the grounds of the Indian Agricultural Research Institute in New Delhi is in the final stage of trials before the variety is allowed to be sold commercially, and that could come within two years, scientists associated with the project say. India placed a moratorium on GM aubergine in 2010 fearing the effect on food safety and biodiversity. Field trials of other GM crops were not formally halted, but the regulatory system was brought to a deadlock. But allowing GM crops is critical to Modi's goal of boosting dismal farm productivity in India, where urbanisation is devouring arable land and population growth will mean there are 1.5 billion mouths to feed by 2030 - more even than China. Starting in August last year, his government resumed the field trials for selected crops with little publicity. "Field trials are already on because our mandate is to find out a scientific review, a scientific evaluation," Environment Minister Prakash Javadekar told Reuters last week. "Confined, safe field trials are on. It's a long process to find out whether it is fully safe or not." Modi was a supporter of GM crops when he was chief minister of Gujarat state over a decade ago, the time when GM cotton was introduced in the country and became a huge success. Launched in 2002, Bt cotton, which produces its own pesticide, is the country's only GM crop and covers 95 percent of India's cotton cultivation of 11.6 million hectares (28.7 million acres). From being a net importer, India has become the world's second-largest producer and exporter of the fibre. However, grassroots groups associated with Modi's Hindu nationalist Bharatiya Janata Party (BJP) have opposed GM crops because of the reliance on seeds patented by multinationals. The Swadeshi Jagran Manch, a nationalist group which promotes self-reliance, has vowed to hold protests if GM food crops are made commercially available. "There is no scientific evidence that GM enhances productivity," said Pradeep, a spokesman for the group. "And in any case, why should we hand over our agriculture to some foreign companies?" A handful of agrichemical and seeds companies dominate the global market for GM crops, including Monsanto Co., DuPont Pioneer, a unit of DuPont, Dow AgroSciences, a unit of Dow Chemical, and Syngenta. SECOND GREEN REVOLUTION Largely agricultural India became self-sufficient in foodgrains after the launch of the Green Revolution in the 1960s, when it introduced high-yielding seed varieties and the use of fertiliser and irrigation. The challenge now is to replicate that success in edible oils and vegetables, which are increasingly in demand. India imports about 60 percent of its edible oil needs at an annual cost of up to $10 billion - its third-biggest import item after crude oil and gold. The trials of the mustard plant, which provides the highest yield of all oilseeds, are being led by Delhi University researchers headed by Deepak Pental, a scientist who returned to India in 1985 from Britain. He has said that he has developed a transgenic mustard strain that raises output by up to 30 percent but that further trials were halted after the moratorium. The environment ministry began approving GM field trials in August, although applicants need to seek no-objection certificates from states where the trials are to be conducted. States ruled by the BJP are spearheading the trials: Last month, Maharashtra gave the all-clear to open field trials of rice, chickpeas, corn and aubergine, as well as new varieties of cotton. Punjab, ruled jointly by the BJP and a local party, gave the go-ahead for mustard in October followed next month by Delhi, then indirectly run by the federal government in the absence of a local government. "The (federal) government is, for a change, being decisive," Pental said, adding his mustard strain could be ready to be released for commercial farming in a year or two. Environmental group Greenpeace however remains opposed. "The current government's rush with open field trials without addressing the fundamental loopholes in the regulatory mechanism is a matter for serious concern," said Manvendra Singh Inaniya, a campaigner for Greenpeace India. "This leaves us vulnerable to contamination with untested and potentially hazardous GM food. We urge the Union Government to roll back approvals given to open air field trials of GM crops." But the environment ministry official said studies have found no ill effects from GM foods and that local firms should partner with multinationals like Monsanto, which has already licensed its Bt Cotton product to several Indian companies. "Farmers are smart and deserve wider choices," a spokesman for Monsanto in India said. "They will only reward products, practices and partnerships which create value on their farms."