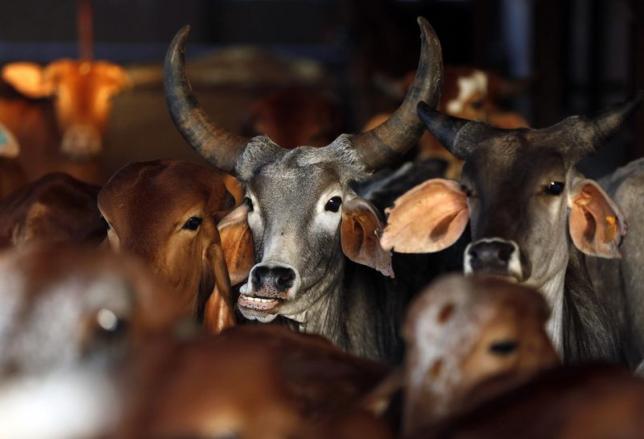 NEW DELHI - India will use all its "might" to ban cow slaughter across the country, interior minister Rajnath Singh said in a speech to spiritual leaders, as the Hindu nationalist government moves to fulfill a poll promise of Prime Minister Narendra Modi. A renewed thrust by Modi's Bharatiya Janata Party (BJP) to protect cows, worshipped by majority Hindus, has led to a clamp down on beef trade run mostly by Muslims. India is the world's second largest beef exporter and fifth biggest consumer. Maharashtra, India's second most populous state, extended a ban on the slaughter of cows to bulls and bullocks this month. Other BJP-led states such as Jharkhand and Haryana have also tightened curbs. "How can we accept the fact that cow slaughter is allowed in this country?" Singh said on Sunday. "We will use all our might to ban it. We will try to build a consensus." Critics say tougher anti-beef laws discriminate against Muslims, Christians and lower-caste Hindus who rely on the cheap meat for protein, and fear they could pave the way to a nationwide ban that would threaten thousands of jobs. India has some 300 million cattle, and animals foraging for food are a familiar sight on the rubbish-strewn streets of towns and villages. Their numbers could swell by 200,000 in Maharashtra alone as farmers abandon animals they can't sell, according to the beef trade. Modi, who in his election campaign last year criticized the previous government for promoting beef exports, in 2011 spearheaded a ban on beef trade in his home state of Gujarat that he led for more than a decade. There is no federal law on cattle slaughter though various states have brought in their own legislation. Maharashtra's latest ban has been widely ridiculed on social media and traders in Mumbai have shut abattoirs for days in protest. Mohammad Ali Qureshi, president of the Bombay Suburban Beef Dealers Association, said a nationwide ban on beef will fail as people in several regions enjoy the meat that is a cheap source of protein. "A nationwide ban on cow slaughter is impossible," Qureshi said. "If the government takes any such decision we won't sit quiet and their will be nationwide protest. They will have to regret their decision." - Reuters