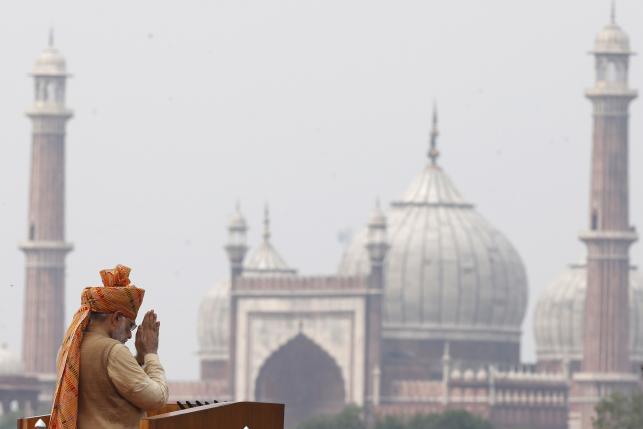 NEW DELHI - Indian Prime Minister Narendra Modi on Saturday sought to shed an image that he governs for big business, vowing to help the poor and create jobs in a speech aimed at bolstering popularity rather than tackling setbacks to economic reform plans. Modi took office just over a year ago on a wave of optimism that he would quickly revive India's economic fortunes but despite a number of victories, opposition to land and tax shake-ups has slowed his progress. Modi's independence day speech focussed on measures his "Team India" had rolled out to include millions of poor Indians in the banking and insurance systems, policies for workers and farmers and successes in the fights against inflation and corruption. "Farmers need protection. For 60 years very little attention was paid to their welfare. We want to change this approach," he said in his second annual address from the ramparts of the Mughal era Red Fort in New Delhi. But he made no mention of his flagship "Make in India" project aimed at speeding up India's industrial revolution, and did not talk about weeks of opposition in parliament that have stalled his plans for pro-industry land and tax reforms. Modi first mentioned "Make in India" on independence day a year ago, when he called on investors to set up in the country. That programme has had some successes, with Taiwan's Foxconn unveiling a $5 billion investment last week. But Modi's party is facing a tightly fought election in the rural state of Bihar in a few weeks where the opposition is seeking to paint him as a "suit, boot" politician whose policies damage the poor. Repeatedly dabbing his face in the humid morning, Modi said he had done more for villagers than any other government. Modi, himself from a poor family, said he was considering incentives for manufacturers to create more jobs and promised to make hiring of blue collar workers merit-based in a culture where it often depends on personal connections. He coined the phrase "start-up India" in a pitch for more people to get entrepreneurial opportunities and called for states to provide electricity for all within 1,000 days - a vast project given that thousands of villages are not on the grid. The slower-than-expected reform pace since Modi stormed to office with India's first lower house majority for a conservative government has disappointed some who expected him to slash the red tape of India's socialist past. "One year later, it seems that caution characterizes the Modi government's performance just as enthusiasm had defined Modi's election promises," the Washington-based Hudson Institute said this week. India's celebrations to mark independence from Britain in 1947 are tinged with sadness because they also recall the bloody partition from Pakistan in which hundreds of thousands died. -Reuters