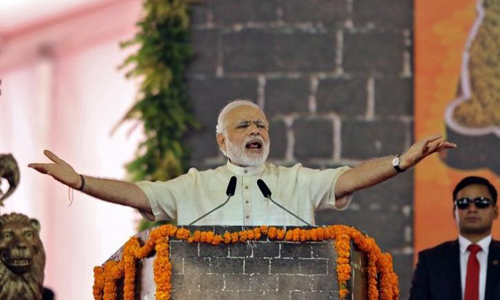 NEW DELHI - India will not hesitate to make tough decisions to help support its growing economy, Prime Minister Narendra Modi said on Saturday, alluding to his recent scrapping of 500 and 1,000 rupee banknotes to tackle endemic corruption. Modi told an event organised by the Securities and Exchange Board of India, India's capital markets regulator that his government would continue to follow sound and prudent economic policies to ensure that India's long-term prospects are bright. "We will not take decisions for short-term political point scoring . . . We will not shy away from taking difficult decisions if those decisions are in the interests of the country," Modi said. "Demonetisation is an example. It is a short-term pain but it will bring long-term gain." Modi announced the shock move to ditch 500 and 1,000 rupee notes with a combined value of $256 billion on Nov. 8, saying the large denomination notes fuelled corruption and fraud and were even used to finance attacks by militants who target India. With the cash economy estimated to account for a fifth of India's $2 trillion gross domestic product, the decision has disrupted the daily lives of hundreds of millions of Indians. But economists and some businesses say it could ultimately help broaden the formal economy and improve tax compliance. Modi said the government had transformed the economy in less than three years by cutting and achieving fiscal deficit targets, keeping the current account deficit low, boosting foreign exchange reserves and lowering inflation. "Developed countries and emerging markets are both facing slow growth. Against this background, India is being seen as a bright spot. Growth is projected to remain among the highest in the world," he said. -Reuters