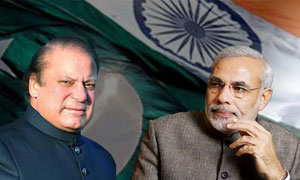 (WEB DESK) - Indian Prime Minister Narendra Modi on Friday telephoned Prime Minister Nawaz Sharif and the heads of other SAARC countries whose teams are playing in the World Cup to wish them luck. Sunday's Pak-India match could be the most-watched game in cricket history and has been eagerly anticipated right across the globe since it was announced. Tickets for the much-anticipated clash between traditional rivals India and Pakistan at Adelaide Oval sold out in just 20 minutes when they went on sale last year. The Indian Prime Minister posted a message on micro-blogging website Twitter, saying that he conveyed best wishes to the leaders of five SAARC nations ahead of Cricket World Cup 2015 event.

The Indian premier hoped that the World Cup will be a treat for sports lovers.

5 SAARC Nations are playing & are excited about the World Cup.Am sure WC will celebrate sportsman spirit & will be a treat for sports lovers — Narendra Modi (@narendramodi) February 13, 2015

He further stated that cricket connects people in the region and promotes goodwill.

Would be sending our new Foreign Secretary on a SAARC Yatra soon to further strengthen our ties. — Narendra Modi (@narendramodi) February 13, 2015