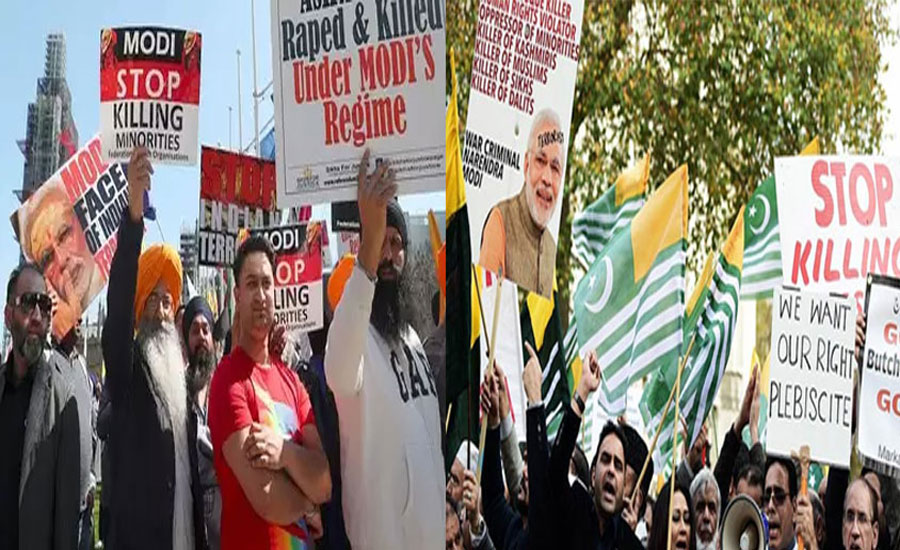 HOUSTON Web Desk) – The US Kashmiri and Khalistan activists and their sympathisers will hold anti-India protest demonstrations and rallies in Houston Texas on the occasion of Indian Prime Minister Narendra Modi’s visit. Kashmiri and Khalistani activists have already made their presence felt with a dress-rehearsal of tractor-trailer trucks decorated with flags and protest signs. The march which started from Sikh National Centre in Houston culminated at the NRG Centre, the venue of the Indian prime minister’s public gathering.

People to protest against Modi in Houston: Gandapur

Minister of Kashmir Affairs and Gilgit Baltistan Ali Amin Gandapur has said that fascist agenda of Modi will be exposed on his arrival in Houston. He was addressing an event organized by the Houston Humanitarian Foundation in US city of Houston. He said that more people will protest against Indian prime minister than those who will participate in his public gathering. Normal life remains disrupted due to continued curfew and military lockdown on 49th successive day on Sunday in Indian Occupied Kashmir (IoK). Millions of people have been besieged in their houses as hundreds of thousands of Indian troops continue to be deployed in every nook and corner of the valley. All shops, markets, business establishments and educational institutions remain closed while transport is off the road. The people are facing immense problems due to continued suspensions of communications means including internet and mobile phone services. On Friday, a huge number of Kashmiri and Pakistani diaspora gathered outside the UN Geneva to condemn more than seven weeks long curfew and communication blockade imposed by brutal Indian authorities in Indian occupied Jammu and Kashmir, organisers’ head has said. Kashmiri diaspora from across the Europe gathered on the call of Kashmiri delegation to Geneva to show their support for the freedom of Kashmiri people, Altaf Hussain Wani, Head of Kashmir delegation, attending the ongoing 42nd session of UN Human Rights Commission in Geneva said over telephone on Saturday.