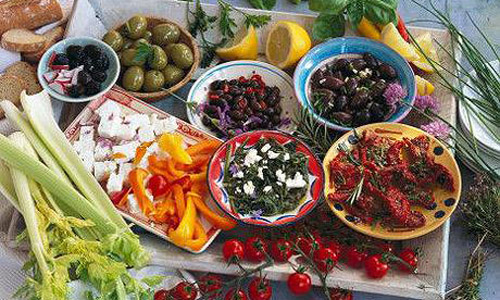 BERLIN - A modified Mediterranean diet with local foods may be easier for some people to stick with and also result in weight loss, suggests a new study from Germany. People on a Mediterranean diet that used more familiar foods and portion-controlled sweets lost weight after 12 weeks and kept most of it off for one year, researchers report. They write in the European Journal of Clinical Nutrition that Mediterranean diets high in olive oil and nuts help people lose weight and prevent heart disease. But some people, including those in Europe and outside the Mediterranean, may find it difficult to stick with such a diet, they add. To test a modified diet, Anja Austel from Gottingen University Medical School in Germanyand colleagues randomly assigned 225 overweight or obese Swedish adults to follow the diet right from the start of the study, or to be added to a waiting list for 12 weeks and then follow the diet. Participants also received information about keeping off the weight they lost. Unlike the traditional Mediterranean diet’s emphasis on olive oil and nuts, the modified diet substituted local flavors like neutral- and butter-flavor canola oil, walnut oil and walnuts. It also allowed for two portion-controlled sweets per day. The California Walnut Commission and the Taste of Sweden Deutschland, who manufactured the flavored canola oil, funded the study. Oil and walnuts were provided to the participants for free. After 12 weeks on the diet, participants lost an average of just over 11 pounds. The average waist measurement fell by almost two inches. By comparison, while they were on the waiting list, members of the control group lost an average of one pound, and had almost no change in waist circumference. After 12 weeks on the diet, participants also had a reduced body mass index (BMI), a measure of weight in relation to height. There was hardly any change in BMI while people were on the waiting list. About 72 percent of the participants complied with the diet during the first 12 weeks, and about half made it through the year - at which point they had kept off about nine pounds. Their cholesterol also improved. Julia Zumpano, a registered dietitian with the heart and vascular group at the Cleveland Clinic who wasn't involved with the study, said she was impressed by the amount of weight lost during the study. “Typically what we suggest, just in general and as well as from a long term weight management standpoint, is if you lose about a pound a week you’re more likely to sustain that weight loss,” she said. Dr. Miguel Angel Martinez-Gonzalez, who also was not involved with the new study, told Reuters Health by email that the study was “well designed, and it adds to the potential transferability of the Mediterranean diet to other non-Mediterranean settings.” Martinez-Gonzalez of the University of Navarra in Pamplona, Spain, said the traditional Mediterranean diet does allow for some flexibility. He said the diet has six major beneficial components: olive oil (especially extra virgin olive oil), fruits and nuts, vegetables, legumes, cereals and whole grains and fish. Meat and dairy products are presumed to be detrimental and should only be consumed sparingly, and red wine can be consumed in small amounts. Zumpano thinks people can get the benefits of a Mediterranean diet even if they substitute different oils. “If you don’t like olive oil, use walnut oil,” she said. “I think peanut oil is fine, I think sunflower oil is fine – any of your polyunsaturated fatty acids.” – Reuters