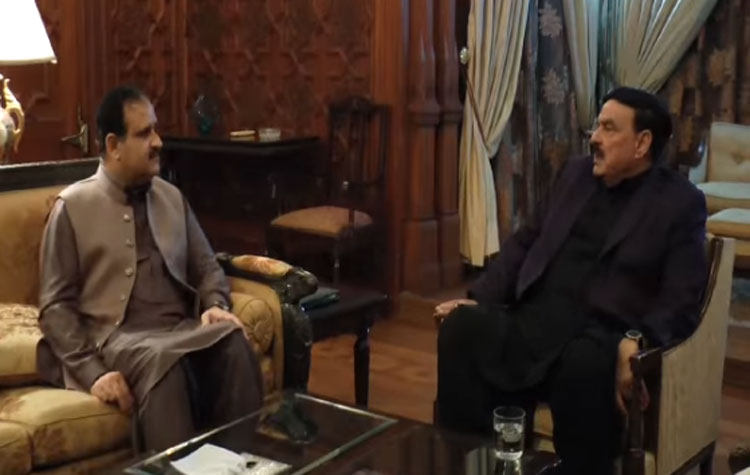 LAHORE (92 News) – Punjab Chief Minister (CM) Sardar Usman Buzdar on Sunday said that Modi government has committed a historical blunder which has refreshed Kashmiri people’s struggle for freedom. The Punjab chief minister met with Federal Minister for Railways Sheikh Rasheed in Lahore on Sunday and strongly condemned atrocities being committed by Indian occupied forces on innocent Kashmiri people. During the meeting, both the leaders showed complete solidarity with oppressed Kashmiri people of occupied valley. On the occasion, the Punjab chief minister said that Modi government has committed a historical blunder which has refreshed Kashmiri people's struggle for independence. He said that a major human tragedy is unfolding in Occupied Kashmir due to Indian stubbornness. https://www.youtube.com/watch?v=vMoA1saUPJg Earlier today, Sheikh Rasheed has said that Kashmir is the issue of whole Islamic world and India wants to make Muslims as second class citizen. Addressing a ceremony in Nankana Sahib, the minister said that India does not want peace in Kabul. “India has left no room for dialogue between the two countries after stripping Kashmir of its autonomy and abrogating articles 370 and 35A of its Constitution. “We do not want war but Modi is a terrorist,” Sheikh Rasheed said. He warned India of any misadventure in the region and said: “If anyone dares to attack Pakistan, then it will be our last war.” The federal minister said the nation stands firmly united with its armed forces in any of situation. Commenting on the peace in Afghanistan, Rasheed said India does not want to see peaceful Afghanistan. He hoped that Kashmir conflict will be resolved in the leadership of Prime Minister Imran Khan. “Prime Minister Imran Khan has raised occupied Kashmir issue effectively”, he added. He also compared the ideologies of Baba Guru Nanak – the founder of Sikhism – and Modi-led Hindu nationalist Indian government that has been committing gross violations of human rights in occupied Kashmir.