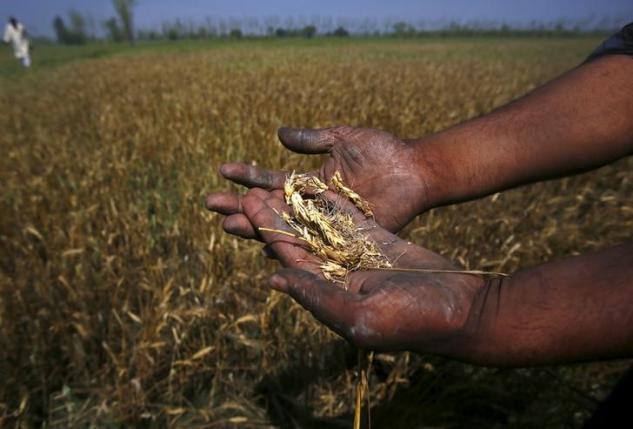 VAIDI - Over a dozen debt-laden farmers have committed suicide in recent weeks in India, and discontent in many rural areas against government policies is turning into anger against Prime Minister Narendra Modi less than a year after he swept into office. Unseasonal storms have badly damaged the winter crop in large parts of the fertile northern plains, most likely contributing to the suicides, and villagers have blamed Modi for not stepping in to help the distressed farmers or ensuring that crop prices remained stable. The farmer suicides in India's most politically sensitive region are the latest in several setbacks for Modi's Hindu nationalist Bharatiya Janata Party (BJP), which is hoping to consolidate power by winning local elections in large, predominantly rural states over the next two years. The government has delayed a comprehensive health plan as it shifts focus from subsidies to investment, while religious tensions have made minorities uneasy. Nevertheless, Modi has made progress with economic reform in his first year - although not as rapidly as some investors would like - and has reined in inflation. [caption id="attachment_12416" align="alignnone" width="500"] 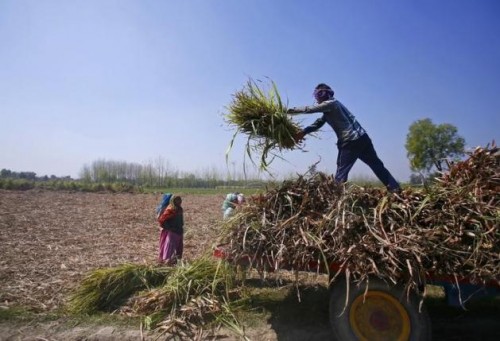 Workers unload stacks of sugarcane on a farmland at Sisola Khurd village, Uttar Pradesh. REUTERS[/caption]   In a village in India's most populous state, Uttar Pradesh, Dharmendra Singh mourned his brother Babu Singh, who committed suicide after rain destroyed wheat growing on the five-acre farm he leased from a landlord. Babu Singh, who had run up debts amounting to $13,000, soaked himself in kerosene and set himself on fire on March 19. He succumbed to burn injuries six days later. "My brother was banking on the crop so the loss came as the last straw," Dharmendra Singh said in his village, Vaidi, 185 km (115 miles) southeast of Delhi. "For God's sake why hasn't the government reached out to us? We overwhelmingly voted for Modi as he promised to take care of us but he has stabbed us in the back." In more than a dozen villages visited by Reuters this week across the state that sends the most lawmakers to parliament, farmers said there was a "crisis" in the countryside, where 70 percent of India's 1.2 billion people live. Angered by low farmgate prices and the lack of state compensation for crop damage, some villagers said they have ostracized local members of Modi's BJP and barred them from attending weddings. Parties crushed by the BJP in last year's general election have coupled the discontent with street protests against a land acquisition bill that will make it easier for businesses to buy farmland, a potent issue in the countryside. For the BJP, the next major election will be in November in the large, mostly rural state of Bihar, and a poor performance will be a huge setback. India's states send representatives to the upper house of the federal parliament, where the BJP is struggling to form a majority to match its domination of the lower house. COULDN'T LIVE WITH DIGNITY With global food prices low, an anti-inflation policy that has hit rural incomes and the shift from subsidy to investment spending, debt-laden farmers were already suffering when rain devastated standing winter crops across north India. Over 10 million hectares (24.7 million acres) of crops were damaged, but the government says there is no clear link to the suicides. "Only the state governments can figure out cases of farmers' suicides," said a senior federal farm ministry official, who did not wish to be identified. "We'll work closely with the affected states if they ask for any specific help." In the case of Singh at least, his family says there is no doubt why he died. The rains earlier this month washed out his entire crop. The fields would have paid for his son's education and daughter's wedding, relatives said. "He knew that he couldn't pay his debt and live with dignity after the crop loss. A little help from the government could have saved my brother," Dharmendra Singh said. It is not unusual for federal and state government compensation for crop damage to trickle down slowly, but farmers said they expected more from Modi, who came to power promising efficient and responsive government. Modi tried to address the issue in a radio address last week, arguing that the land bill would help create rural jobs. But in the villages of Uttar Pradesh, farmers were not impressed. "Instead of ensuring some concrete help to farmers, especially after rains this month, Modi and his government are spending time and energy on the land bill," said Buddha Singh, a district chief of the Bharatiya Kisan Union, a leading farmers' body. The turnaround is dramatic - Modi swept Uttar Pradesh last year, winning 73 of 80 seats with rural voters swayed by a promise to pay high crop prices along with religious tensions that favored his Hindu nationalist party. Now the same farmers say they regret their support. "Modi has let us down. We have decided to socially boycott BJP politicians, including lawmakers we elected," said Jitendra Kumar, a farmer in Sisola Khurd village. "Some of us had joined BJP as part of its membership drive but we are now going to surrender it." - Reuters