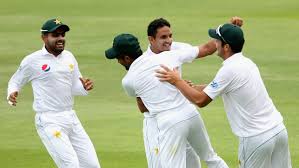 DUBAI (92 News) - Mohammad Abbas, the Pakistan paceman, has a shoulder injury and might not recover in time for the final, deciding Test match against New Zealand.

Abbas injured his right shoulder while fielding in the second Test against New Zealand, which Pakistan won by an innings and 16 runs courtesy Yasir Shah’s 14-wicket haul. The third-best Test bowler in the world according to the MRF Tyres ICC Test Player Rankings, Abbas didn’t have much to do in the second Test in Dubai, bowling 24 wicketless overs. But he did pick up two wickets in the first Test – played in Abu Dhabi, the venue for the third Test – to take his tally up to 61 from just 11 Tests (now 12). In case Abbas isn’t fit for the game, Shaheen Shah Afridi could well be in line for his Test debut, with Mir Hamza the only other premier pace-bowling option in the squad.