DUBAI (92 News) – Mohammad Abbas, the Pakistan pace bowler, needs one more scalp to reach 50 Test wickets, and has his sights firmly set on breaking a record.
Abbas, playing just his ninth Test, has already picked up seven wickets in the opening match against Australia in Dubai. If he gets one more, he will join Yasir Shah, the leg-spinner who has been luckless so far in this match, as the quickest in terms of Tests to reach the landmark of 50 wickets for Pakistan. Speaking after the day’s play on Wednesday, 10 October, when he accounted for all three Australian wickets to fall in the day, Abbas said he had been aiming not only to help his team to victory, but also for that record. “Yasir bhai has the record, in nine matches. But among fast bowlers, Waqar [Younis], [Mohammad] Asif and Shabbir [Ahmed] have 50 wickets in 10 matches," he pointed out. “So my aim before the start of this match was to break that record and be the quickest fast bowler to 50 wickets. I now need one more wicket. I will try my best to do that. “If not, I just want to bowl in a way that helps the team win.” 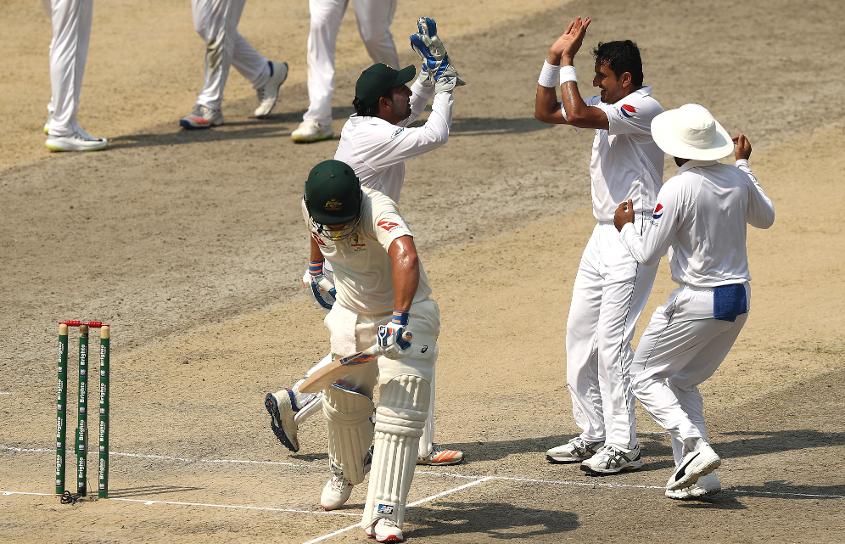 Abbas, who was also Player of the Series in Pakistan’s previous Test series in England, said the key to his success was understanding the conditions, keeping it simple while bowling wicket to wicket, and waiting to take advantage of reverse swing. “You should know your own strength,” he said. “I try to take wickets with the new ball. In these conditions, I focus on my line and length and not to give away too many runs, bowl on the right areas. “When the ball starts to reverse, I try to attack then. I have been successful because of that. If you talk about pace, my fastest ball here was 138.1km/h and my average speed is 130. I am happy with my speed. But I want to keep on working on my fitness to become a better bowler.” Abbas acknowledged that playing county cricket for Leicestershire helped him get into a good rhythm in the season. “Playing county cricket helped me. There was a heatwave in England when I played and that helped me get reverse swing. On the Leicestershire wicket, the ball keeps low on the fourth day. It’s almost like wickets in Pakistan in Sind and Karachi. That helped me a lot," he said. “I was in form, as well. I took 10 wickets in my last match [against Durham], so my aim here was to continue the same form.” Australia begin the fifth day of the Test on 136/3, needing 326 more for victory.