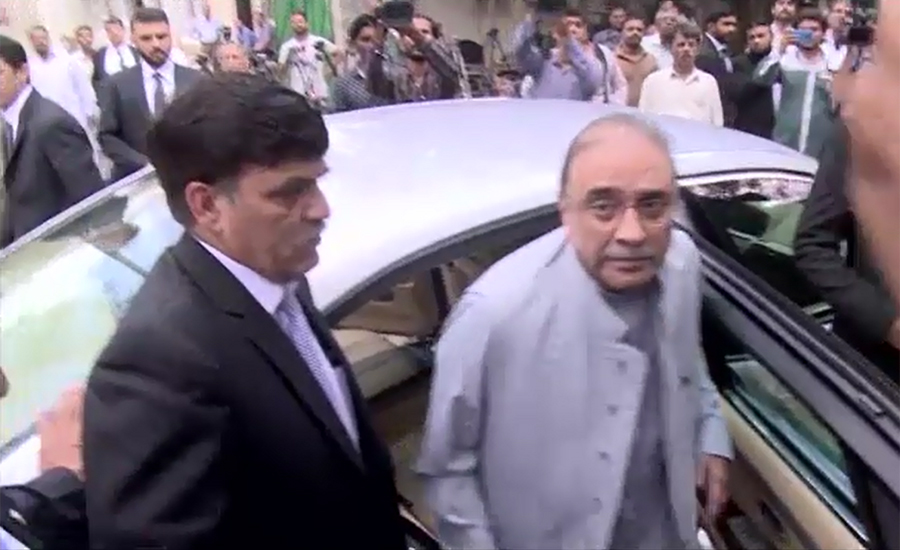 KARACHI (92 News) – A banking court adjourned the mega money laundering case against Asif Zardari, Faryal Talpur and others until December 10. The court also extended the interim bail of the accused until the said date. Moreover, the FIA sought permission to investigate the arrested accused Anwar Majeed, Abdul Ghani Majeed, Hussain Lawai and Taha. However, the defence counsel objected to the permission. The FIA told court that legal requirements are being fulfilled to declare the absconding accused proclaimed offenders. “Posters have been displayed on the houses of the accused and letters written to the commissioner concerned for getting information,” he said. The situation became interesting when Asif Zardari came and returned back. Later, his lawyers phoned and asked him to return and mark the attendance. Last month, Lawai and banker Taha Raza were detained and booked for allegedly facilitating the opening of 29 ‘fake’ accounts through which suspicious transactions were made to different companies, including M/s Zardari Group. Zardari's sister Faryal Talpur had also obtained an interim pre-arrest bail in the case in the sum of Rs2 million. Both the siblings are facing corruption charges relating to fake accounts and fictitious bank transactions worth Rs35 billion. Both Zardari and Talpur face allegations that they had illegally channelled funds through the said accounts in connivance with the chief executive officers of major banks.