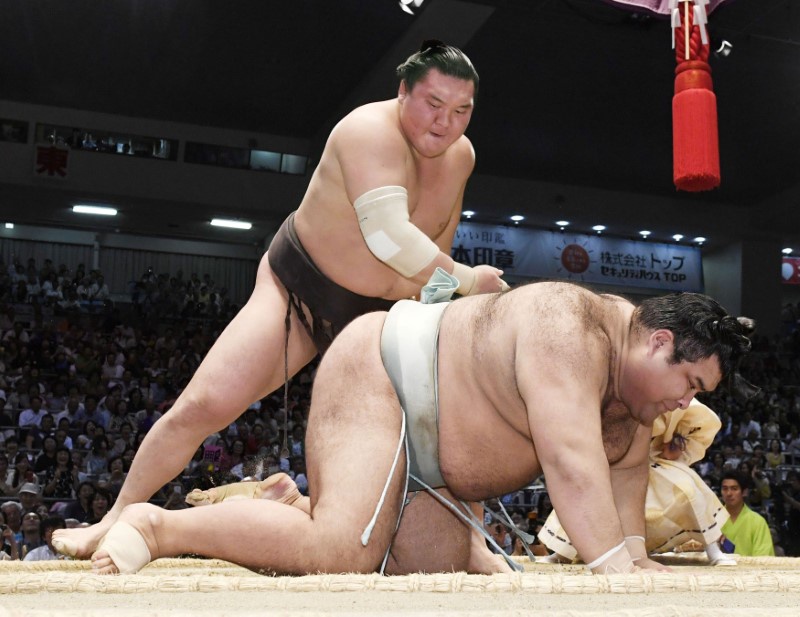 TOKYO (Reuters) - Mongolian sumo wrestler Hakuho on Friday smashed the record for most career wins in Japan's national sport as the 'yokozuna', or grand champion, took down Takayasu in a frenetic bout to deafening cheers at the Nagoya Grand Sumo Tournament.

The Mongolian - who was so small when he arrived in Japan at age 15 only a minor sumo 'stable' would take him in - also holds the record for the most number of tournament wins.

"I'm glad that I was able to show this victory to the fans," the 192cm-framed wrestler said, struggling to catch his breath after the historic win against his 'ozeki'-ranked rival.

"If you put something into words, then it can come true. But you can also say my practise before this tournament and my body's condition led to this result."

The historic win came just 16 years after Hakuho's debut, versus the 23 years it took for the previous record holder.

Three of the four wrestlers in the sport's top yokozuna rank are Mongolian. The fourth, Kisenosato, became the first home-grown grand champion in nearly two decades when he was promoted earlier in January.

Despite the prevalence of non-native 'rikishi', or wrestlers, the sumo association forbids foreign nationals from becoming sumo master, or 'oyakata' - a title that successful wrestlers often seek after they retire.

Several local media reported on Friday that Hakuho plans to attain Japanese citizenship "in the near future" so he can be oyakata one day - a move that could stir controversy in his native Mongolia.

Hakuho's father is regarded as a national hero as the country's first-ever Olympic medallist, when he won silver for wrestling in 1968.

Hakuho was rumoured to be seeking an exception to the nationality rule given his achievements in the sport, while the sumo association has repeatedly said it would not change the rule.

Six former rikishi have given up their original nationalities to become oyakata, since Japan does not allow adults to hold dual citizenship.