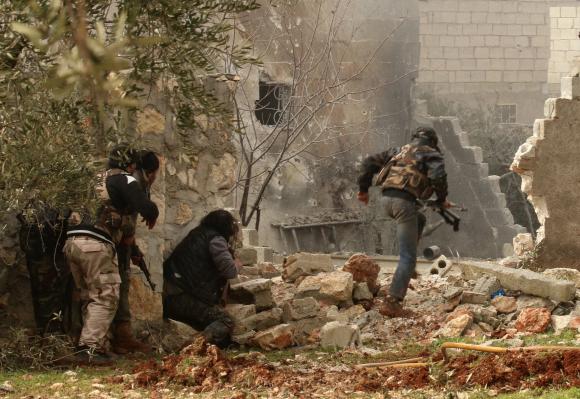 AMMAN (Reuters) - A monitoring group said on Saturday Syrian government forces and allied militants killed 48 fighters and family members during last week's offensive against opposition-held areas in Aleppo province, but the army denied it. "I deny completely such an act that cannot be committed by the Syrian army whose duty is to protect lives and not kill people," a military source told Reuters. He said armed groups kill residents whom they suspect of being loyal or working with the government and accuse the army of committing the acts. The Britain-based Syrian Observatory for Human Rights said on Saturday the dead were shot mainly in their homes in the village of Raitan on Tuesday shortly after the village fell to the army and loyalist forces including Iranian fighters and members of Lebanese Hezbollah. Five women and 10 children were among those killed, it added. Rami Abdul Rahman, the head of the monitor, said his group confirmed the killings in the village from locals. Reuters could not verify these accounts. Aleppo, Syria's second-largest city, is at the forefront of clashes between pro-government forces and a range of insurgents, including Islamist brigades, al Qaeda's Syria wing the Nusra Front, and Western backed units. The affiliation of those killed was not immediately clear. Nearly four years of fighting in Syria has killed at least 200,000 people and forced 10 million from their homes, triggering a humanitarian crisis that shows no sign of ending. The army made rapid advances in its offensive but met strong resistance and had to withdraw from Raitan and Hardatain, the monitor and rebel groups say. Abdul Rahman said dozens of government forces had been killed and many were captured.