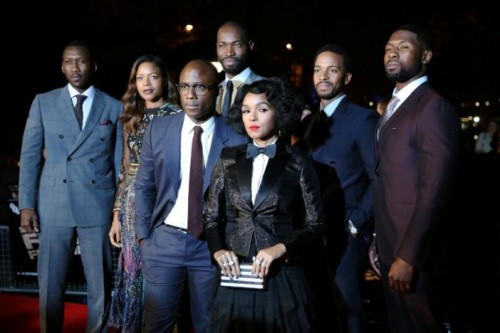 LONDON- A film about a young black impoverished man's struggle with his sexuality hopes to give a voice to characters not often seen in movies, according to the cast and director of "Moonlight." "Moonlight," which debuted on Thursday at the London Film Festival after receiving strong reviews last month at the Toronto International Film Festival, is the coming-of-age tale of a black boy named Chiron, grappling silently with his homosexuality. The movie, based on Tarell McCraney's play "In Moonlight Black Boys Look Blue," tells Chiron's story in three chapters - as a skinny child called 'Little,' picked on by his peers; as a skinny teenager, bullied as he tries to understand his sexuality; and as a hardened grown man who goes by 'Black.' "It's almost taboo to be a black American man who is homosexual, or a black man who is homosexual because growing up you're told that you have to be that much more imposing, that much bigger, that much better ... than your counterparts," said Trevante Rhodes, who plays adult Chiron. "It's kind of oxymoronic to be homosexual and have those same attributes." Set in impoverished neighborhoods of Miami, the film shows a black community supporting each other where they can - such as when a young Chiron, neglected by his drug-addict mother, finds a surrogate family in a couple. Naomi Harris, who plays Chiron's troubled mother, said the film "sheds light on a section of society that doesn't normally get light shed on it." "It has universal themes about humanity, about our universal search for love and also it's representing the gay community in a way that I don't think they generally are represented," the actress said. Director Barry Jenkins added, "I don't think we see characters like this often in the arts." He said when he read McCraney's play, "it grabbed me in such a way that I thought it would be cowardly not to look at it." The film, out in UK theaters this week and in U.S. theaters on Oct. 21, has already been garnering Oscar buzz for its subject matter and performances. Janelle Monae, who plays a surrogate mother figure to Chiron, said she hoped movie-goes would "feel more empathetic towards the black, poor gay male experience and that we continue not to ostracize those who are different from us." -Reuters