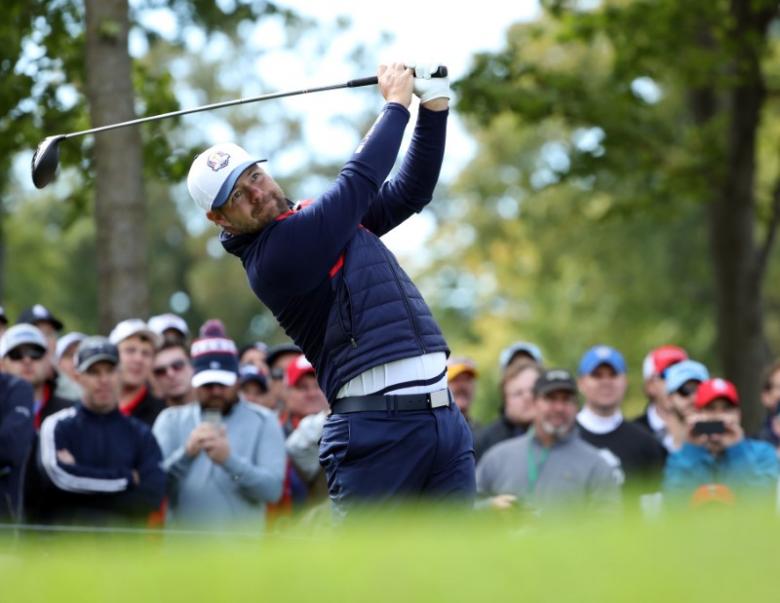 CHASKA - Ryan Moore was fitted out for team uniforms as a possible Ryder Cup or Presidents Cup selection for the United States for nearly a decade, only to miss out when the final lineup was announced.
Midway through this year, he was so far back in the US Ryder Cup standings that he never even received the tailor's call, but he then produced a sizzling run of form on the PGA Tour to earn the last wildcard spot on Davis Love III's team.
"So apparently I'm not going to do it (the fitting) from now on, ever," a smiling Moore told reporters at Hazeltine on Tuesday after a practice round with team mates JB Holmes, Brandt Snedeker and Brooks Koepka. "Hopefully I stay about the same size so it's easy for them (the tailors). I've wanted to be a part of one of these events, was beginning to think it might not happen. "But I would have loved to have earned my way on (automatically) and have it not be up to a captain's pick." Moore secured Love's final wildcard selection with a red-hot run since the PGA Championship in July, highlighted by a victory at the John Deere Classic in August and a playoff loss to Rory McIlroy at the season-ending Tour Championship on Sunday. However, he did not know he would make his Ryder Cup debut at the age of 33 until nearly an hour after the Tour Championship was over, having missed Love's initial phone call. "I was like, whoops, I'm meant to be paying closer attention," said Moore, a five-times winner on the PGA Tour who has not played team golf since the Palmer Cup for college players in 2004. "But I called him right back, and obviously I could tell right away it was a positive conversation. Until I got the phone call, I still really didn't know. I didn't know where they (Love and his assistant captains) were at. "I knew I had done everything I really could in my power, besides winning the golf tournament, to show them where my game's at and that I could be an asset to the team. It was an amazing phone call to get." -Reuters