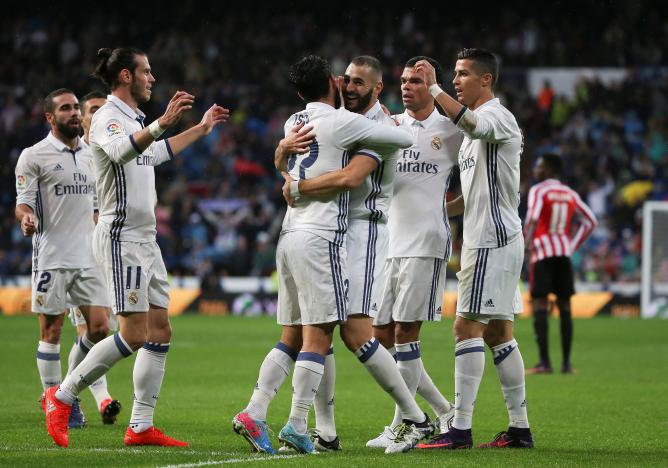 BARCELONA - A scrappy late finish by Alvaro Morata earned Real Madrid a 2-1 win over Athletic Bilbao and allowed them to dislodge Atletico Madrid as La Liga leaders after Diego Simeone's men went down 2-1 at Sevilla for their first defeat of the season. The result proved costly for Atletico as they slipped to fifth in the standings, behind Real, Sevilla, Barcelona and Villarreal, 2-1 winners over Las Palmas thanks to Cedric Bakambu's injury time winner. Former Juventus striker Morata bundled the ball into the net in the 83rd minute after Real had squandered several chances to retake the lead following Sabin Merino's equaliser for Athletic that cancelled out Karim Benzema's first-half opener. Benzema knocked the ball through the legs of Athletic goalkeeper Gorka Iraizoz to put Real ahead in the seventh minute after an impressive run and cut-back from Isco. Athletic hit back later in the half when Javier Eraso pounced on indecisive Real defending to win the ball back in the box, quickly squaring for Merino to ram the ball home. Inaki Williams skied a great chance to put Athletic ahead at the start of the second half although Real did most of the attacking after the break, with Cristiano Ronaldo, Gareth Bale and Mateo Kovacic all going close. The European champions found their winner thanks to the persistence of Morata, who followed up after his shot was repelled by Iraizoz to give Real a third straight win in all competitions. "We know we can never give up and today we kept our heads and got the three points, always remembering that this is football and you have to suffer," Real coach Zinedine Zidane told a news conference. "We have to produce thorough performances in every game and play well because there won't be any easy games and we'll have to suffer until the end. That's the message I want to transmit." Real Madrid lead the table on 21 points, while Sevilla are second on 20 after Steven Nzonzi's second-half strike gave them a 1-0 win over 10-man Atletico Madrid. Champions Barcelona are on 19 alongside Villarreal, while Atletico are on 18. Former Blackburn Rovers and Stoke City midfielder Nzonzi skipped past Atletico's backline to latch onto a through ball from Atletico loanee Luciano Vietto to score in the 73rd minute and seal Sevilla's first win over Atletico in over six years. Atletico and Spain midfielder Koke was dismissed for a second booking in the 77th minute. The visiting side almost snatched a late equaliser but defender Diego Godin's header went straight towards Sevilla goalkeeper Sergio Rico. "I'm proud of the team, we had a lot of opportunities and the performance makes me very happy about the path we are on," said Sevilla coach Jorge Sampaoli. "Nzonzi is not just here to put the brakes on the opposition but to create chances too as he did today. Vietto is contributing a lot of assists and we saw his contribution with the goal. I'm delighted with them both." Kevin-Prince Boateng finished a sensational team move with a volley to put Las Palmas ahead in the first half at Villarreal but Italian forward Nicola Sansone levelled from the spot in the 64th, before Bakambu slammed in the winner in the 91st. Earlier, Celta Vigo beat Deportivo La Coruna 4-1 in a local derby. Captain Hugo Mallo put Celta ahead in the 32nd minute only for Raul Albentosa to reply in the 37th. Iago Aspas converted a penalty to restore Celta's lead on the hour mark and hit the final goal after standout player Fabian Orellana had struck the third. Malaga thrashed Leganes 4-0. -Reuters