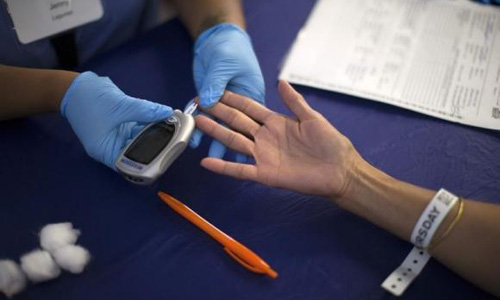 WASHINGTON - U.S. states that expanded their Medicaid programs under the Affordable Care Act have seen larger increases in diabetes cases than states that didn’t expand their programs, a new study shows. The findings suggest that expanding Medicaid, the government-run health insurance for the poor, allows people with diabetes to be diagnosed earlier than before, which may improve outcomes later on, the researchers say. "This is important because diabetes is becoming more prevalent as the population gets older,” said Dr. Harvey Kaufman, lead author of the study and senior medical director at Quest Diagnostics, which funded the analysis. In the early stages of the disease, people can make lifestyle changes and get care that helps delay complications, he added. If left untreated, diabetes can lead to vision loss, kidney failure, nerve problems and amputations of the legs and feet, according to the U.S. Centers for Disease Control and Prevention. The agency says $176 billion is spent on diabetes and its complications each year. Diabetes occurs when the body can't properly use or make enough of the hormone insulin to convert blood sugar into energy, according to the World Health Organization (WHO). About one in nine adults has diabetes, according to the WHO. Type 2 diabetes accounts for the vast majority of cases and is linked to obesity and advanced age. Kaufman and colleagues focused their research on the hemoglobin A1c test, which measures the average blood sugar level for the past two or three months. Using Quest Diagnostics’ database of lab tests, which includes about 150 million patient encounters annually, they counted how many people had at least one blood sugar test that was negative before Medicaid expansion and positive afterwards. In January 2014, 26 states expanded access to Medicaid and 24 did not. Where more people got Medicaid, newly diagnosed diabetes cases among Medicaid recipients surged 23 percent, from 14,625 in the first six months of 2013 to 18,020 in the first six months of 2014. In states that didn't expand Medicaid, diagnosis increased just 0.4 percent. People are considered diabetic when their A1c level is at least 6.5 percent. Where Medicaid was expanded, the average A1c levels of newly diagnosed diabetes patients was 7.96 percent, compared with 8.14 percent in non-expansion states. "It was apparent in the non-expansion states that you are making diagnosis at a later stage when they are presenting at the hospital with complications," said Dr. Robert Ratner, chief scientific and medical officer of the American Diabetes Association. "The earlier you catch the disease, the easier it is to treat, and the more responsive it is and the more stable it can be," said Ratner, who wasn't involved in the study. While more women in the study had diabetes, the increase in diagnosis was steeper for men. Gains were also greater for older people, aged 50 to 64, than for individuals aged 19 to 49. The study had some limitations, including its reliance only on records from blood sugar tests done by Quest Diagnostics and its lack of clinical information. It's also possible that some patients tested at Quest might have been diagnosed prior to the start of the study period. Because it's only based on tests at Quest, "you don't know 100 percent if this was a new diagnosis, and not something the patient might have already known," said Dr. Benjamin Sommers, a health economist at Harvard University. "But the overall study design makes a lot of sense." The number of newly diagnosed diabetes cases in the states where Medicaid expanded bodes well for the detection of other chronic health conditions which, like diabetes, may not immediately cause symptoms that are easy for patients to detect on their own, Sommers said. "With the expanded coverage, you're not going to diagnose more broken bones because whether or not they have insurance, when somebody breaks a leg they are going to get an x-ray," said Sommers, who wasn't involved in the study. "These findings with diabetes may be the tip of the iceberg, and you can imagine similar outcomes for earlier detection of high blood pressure, or cancer, or mental illness." - REUTERS