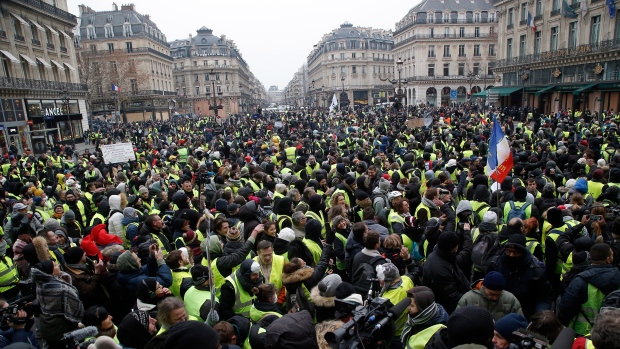 PARIS (Reuters) – Thousands of French “yellow vest” demonstrators marched on Saturday for their 13th weekend of action, with scuffles in Paris and a demonstrator’s hand mangled by a small explosive. There was also an overnight arson attack on the Brittany residence of the National Assembly head - though no immediate link was made to the actions against President Emmanuel Macron. The “yellow vest” demonstrators, named for high-visibility car jackets, began in mid-November over fuel taxes then broadened into a more general revolt against a political class they view as out of touch with common people. In Paris, several thousand marched on Saturday beside symbols of power such as the National Assembly and Senate. Though mainly peaceful, some protesters threw objects at security forces, a scooter and a police van were set on fire, and some shop windows were smashed. One participant’s hand was severely injured when he tried to pick up a so-called “sting-ball grenade” used by police to disperse crowds with teargas, a police source told Reuters. Another man had blood streaming down his face in front of a line of riot police. The Interior Ministry put the total number of protesters around France at 12,000, including 4,000 in Paris. The police source, however, said numbers were higher, with 21,000 demonstrators taking part in rallies outside Paris. “We’re not children, we’re adults,” said Hugues Salone, a computer engineer from Paris, among the chanting and placard-waving protesters. “We really want to assert our choices, and not the choices of the politicians who do not live up to them.” Leaders of the “yellow vest” movement have denounced the police for injuring protesters, but have also struggled to contain violence from their own lines. On some previous weekends, Paris has been a battleground. Politicians from across the political spectrum condemned the arson attack on the home of Richard Ferrand, a close ally of Macron and president of parliament’s lower house. He published pictures on Twitter of a scorched living room, saying police found materials soaked in fuel. Ferrand said criminal intent was the likely cause, though the perpetrators’ identity was unclear. “Nothing justifies intimidations and violence towards an elected official of the Republic,” Macron tweeted in relation to the incident.