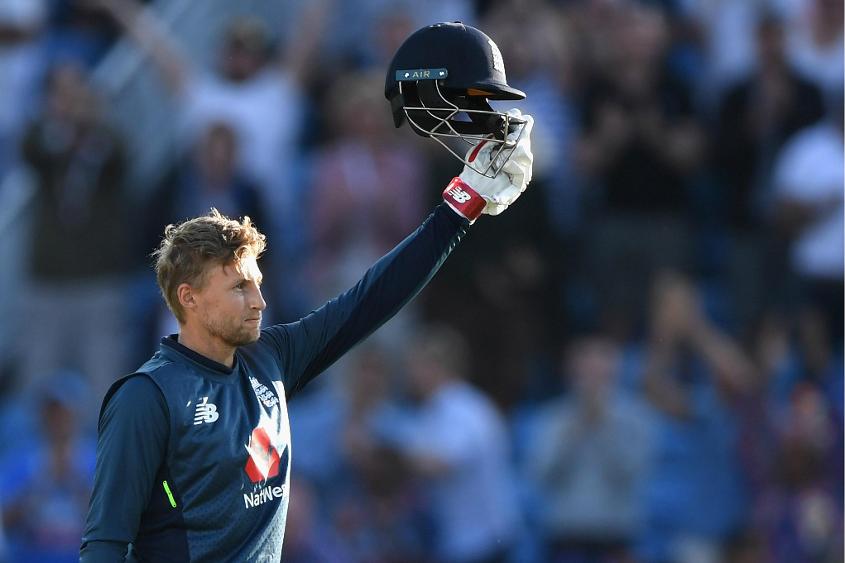 Joe Root may have introduced cricket to the mic-drop, but the England Test captain is already regretting it. “It’s the most embarrassing thing I’ve done,” he says.

Root put behind a poor start to the series against India – he managed scores of 0, 9 and 3 in the two T20Is and the first ODI – before turning it around at Lord’s in the second ODI with 113*. He backed that up with another century in the final ODI in Leeds as England won the series 2-1. At Headingley, Root celebrated his century by dropping his bat – the bat drop, like stand-up comedians and musicians do the mic-drop. The move immediately went viral on social media, where it was well received, but Root is copping a lot of flak from his team-mates. “It was something that I immediately regretted,” said Root. “I've not heard the end of it, it was literally the most embarrassing thing I've done on a cricket field. “I don't think it will be the last I hear of it from the group – they've been hammering me.” Despite that, England will be buoyed by Root’s return to form, ahead of the five-match Test series starting on 1 August. Root was dismissed by Kuldeep Yadav, India’s left-arm wrist-spinner, twice in three matches, with the Englishman struggling to pick the bowler. However, Root had him figured out at Lord’s, and that bodes well for England, given Yadav was included in the India’s squad for the first three Tests. “I looked at the three balls I faced and got out to – one thing that's very easy to do is over-analyse things, over-think things," said Root. “I felt like I was picking him (Yadav) fine and when you look at it for what it actually was, both games my movements weren't quick enough and I wasn't getting close enough to the ball, either going forward or back. “The best players of spin in the world, their footwork is always sharp and when that contact point is there, you're as still as possible.” The 2-1 series victory justified England’s place at the top of the MRF Tyres ICC ODI Rankings, but Root urged the Test side to follow the example of their ODI unit. “It's something we are trying really hard to replicate within the Test team,” Root said. “Hopefully over time, and it's not something that will happen overnight, we'll see big improvements long-term within the group. “It's about putting the hard yards in and doing that extra bit of work and sometimes doing the stuff that doesn't always make you feel good but ultimately will make you a better player.”