After IS, Mosul rebuilds monuments, mosques -- and society 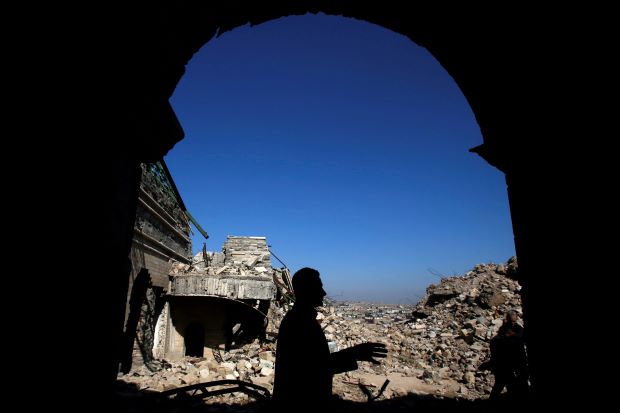 After IS, Mosul rebuilds monuments, mosques -- and society

MOSUL - Faisal Jeber arrested and interrogated suspected Islamic State militants during the battle for Mosul. Now he is taking up a new fight that could be just as crucial to the city's future.

The 47-year-old geologist is trying to restore historical sites damaged during the militant Islamist group's brutal three-year rule over the northern Iraqi city.

By piecing back together buildings which he says gave Mosul its soul and identity before the war, Jeber hopes also to help rebuild its social fabric.

But the city's renaissance could take a generation, if it happens at all, he says, and it is uncertain how Mosul and other Iraqi towns and cities recaptured by government forces will look afterwards.

How Mosul's identity is reconstituted will help determine whether Iraqi leaders can pacify a country dogged by jihadists and sectarian bloodshed for the past decade.

"ISIS (Islamic State) tried hard to destroy Mosul's identity by demolishing everything and making it monochrome," Faisal told Reuters in Mosul. "I am using this to unite my city and then maybe the whole country."

Before the war, Mosul was Iraq's second-largest city, known for its diversity, religious conservatism and nationalism. After the U.S.-led invasion that toppled Saddam Hussein in 2003, it became a base for al Qaeda and the Sunni insurgency.

Since IS seized Mosul in 2014 in the face of the Iraqi army's collapse, the militants have blown up monuments, evicted communities that had lived together for centuries and turned neighbours against each other.

Following the group's defeat in Mosul this month in a U.S-backed offensive, billboards have gone up on a main road hailing the city as the cradle of civilisation and showing landmarks dating back to the days of Mesopotamia.

It is, Jeber says, a unique moment to rebuild Mosul's multicultural identity and combat radical Islamism.

"It's an opportunity and it's just the right time to do it because if you talked to any Mosulawi about that before (IS), nobody would accept it. But now people came out of a radical Muslim experience, they are in shock," he said.

"Either we do it this year and we use this opportunity or else we lose it forever. We have a very narrow window."

Jeber was detained by IS in 2014 on suspicion of spying and threatened with execution, but escaped and went on to use his knowledge of Mosul to help Iraqi forces target the insurgents.

He formed a government-backed militia last year to arrest and interrogate suspected militants in areas retaken from IS but now intends to use it to secure heritage sites. He also runs a non-governmental organisation tasked with restoring antiquities.

Jeber wants to start rebuilding at the site of the Mosque of the Prophet Jonah, which was constructed on top of a Christian monastery. The site marks Jonah's mythical burial place and also contains the remains of a Zoroastrian temple and an Assyrian palace.

"The site is four levels of civilisation," he explained during a visit to the site this month.

IS blew up the mosque and dug tunnels in search of valuable antiquities, destabilising the base.

Muslim clerics want to rebuild the site as a mosque. One has already set a cornerstone but Jeber says that restoring it as a heritage site honouring its multiple historical identities would do much more to turn the page on IS.

There is, however, no guarantee Mosul will be the same as it was before IS arrived. Some exhausted residents have stopped attending mosque and are looking for an alternative to the religiosity that was once central to their lives.

Ramadan, the Muslim month of fasting, was less strictly observed this year in eastern Mosul after the Iraqi military forced out IS. Some restaurants stayed open and people smoked in public, acts prohibited even before the militants' takeover.

A Matter of Trust

Reviving Mosul's historic traditions will depend partly on whether Iraq's Shi'ite-led government can win the trust of Sunnis, many of whom welcomed IS when it stormed the city because they felt marginalised and mistreated.

Abu Abdullah, sitting on a plastic chair outside his shop, says many men joined IS not because they were convinced by its ideology but because of disaffection with government corruption.

"Daesh (IS) gained popularity because of injustice. If the injustice remains, maybe these youths will revert to that," he said. "There could be a new Daesh which would be more intense."

Many people simply do not feel safe, including Sunni Arabs whose neighbours supported IS and members of minority groups such as 30-year-old Christian schoolteacher Kindi Majeed. He fled Mosul with his wife but his mother stayed behind and died in a hospital 10 days before Iraqi forces recaptured it.

He now lives in a camp an hour's drive from Mosul housing 5,000 Christians. He has no plans to return to the city. "Daesh militants have been eliminated but the Daesh idea remains," he said. "How can I live with my neighbours who branded me an infidel? How can my daughter live with them?" -Reuters