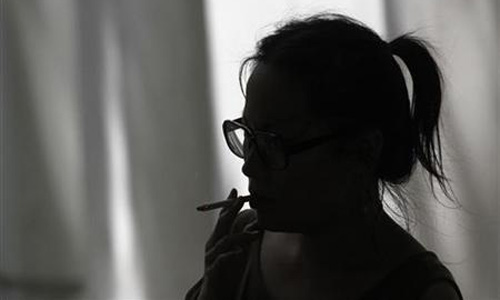 (Reuters Health) Girls whose mothers smoked while pregnant entered puberty at a younger age in a new Australian study. Since early menstruation is linked to higher risk of uterine, endometrial and breast cancers later in life, the researchers say that maternal smoking could set up daughters for health problems even before they’re born. "The real take home message of this study is that we have probably just hit the tip of the iceberg in terms of understanding just how harmful smoking during pregnancy can be on the child," said lead author Alison Behie, a biological anthropologist at Australian National University in Canberra. Behie notes that the potential effects of smoking during pregnancy have been known for a long time, and can show up at birth or later on in childhood and adolescence. Health risks children may face when mothers smoke during pregnancy include low birth weight, asthma, type 2 diabetes and obesity, according to Behie. But recent research is beginning to reveal how some effects may evolve over the very long term and have an impact well into adulthood. "This study not only highlights the risk of reproductive cancers for daughters of women who smoke in pregnancy but suggests why this might occur at a biological level," she told Reuters Health in an email. "The behaviors and condition of mothers during pregnancy are extremely important for the health of their children long into the future." For the new study, published in the journal Human Reproduction, the researchers evaluated data on almost 1,500 girls that included information about their mothers’ smoking history and followed the girls from birth until they were 12 to 13 years old. At the time of the last interviews included in the analysis, 845 girls had started menstruating. Behie’s team found several factors that influenced the age at which the girls would experience their first period: The mother's age at her first period, the body weight of the girl when she was eight or nine years old, the girl's birth weight and the mother’s cigarette smoking during pregnancy. Smoking during pregnancy was a significant factor, the researchers report, only if the mother smoked on “most days,” and not just occasionally. The daughters exposed to regular smoking in utero were about 40 percent more likely than girls of non-smoking mothers to have an early age of first menstruation. Girls who were heavy at age eight or nine were about 12 percent more likely than normal-weight girls to have early menstruation. In addition, girls whose weight at birth was low – something also associated with smoking during pregnancy – were about 14 percent more likely than normal-birthweight girls to have early menstruation. The researchers accounted for each of these factors when calculating the influence of the others. Still, the associations do not prove cause and effect and the study team acknowledges that more research is needed to understand how the effects of maternal smoking might unfold. Other studies have shown that a variety of mental and physical stresses a mother experiences while pregnant can affect her developing fetus, leading to permanent changes in the activity of genes, for example, Behie and her coauthor point out. Behie said she and her colleague are continuing their work, because one of this study’s limitations is that not all of the girls had reached menarche. The next study will look at the same girls at ages 14 to 15. The additional data should allow the researchers to determine how much earlier the daughters of smokers are expected to reach menarche. It will also allow them to link up with existing studies of how much more likely a girl is to develop a reproductive cancer for every year earlier she reaches menarche. "Being able to potentially quantify the increased risk for the daughters of smokers would give more weight to the argument made here," Behie said.